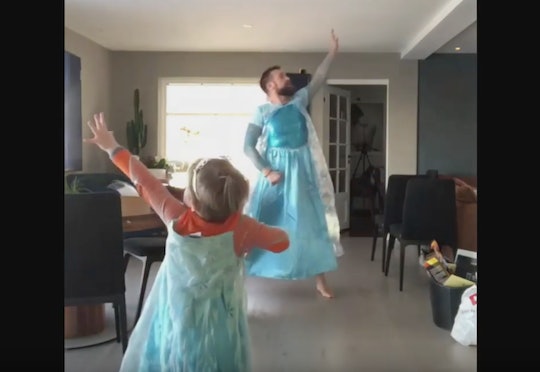 The recent, controversial Gillette ad thrust the topic of toxic masculinity into the spotlight yet again, sparking debates and heated reactions all around. But along with serious discussion and self-reflection, a gentler form of gender role disruption is occurring — and parents are playing a big role in that. For example, this dad and his 4-year-old son danced in Frozen costumes, and the viral video of it confronts toxic masculinity in a way that is equal parts empowering and downright adorable.

Ørjan Burøe, comedian and dad from Norway, posted a video of himself and his son Dexter dancing their hearts out to the hit Frozen song "Let It Go," while each wearing a version of Elsa's iconic blue dress. The dance video has since gone viral — with more than 39 million views so far — leading to laughs and smiles around the world. But Burøe said that there is an important purpose behind his and Dexter's dance party.

"[Dexter]'s just the biggest fan of Elsa at the moment," Burøe told CBS News. "I thought maybe I should try to see it through his eyes." So naturally, dad ordered two Elsa costumes on eBay and dressed up with his son to get down. Buroøe told CBS News that his son and the public both learn something from the experience. "It's important to embarrass yourself and let it go," he told the news outlet.

Despite what his critics might say, he sees nothing wrong with a grown man and his son dancing around in dresses — and neither do I, for the record.

Burøe explained that his son, like many young children, loves Frozen because of Elsa's strong character; gender simply doesn't come into it. "Just like kids don't see color of skin," he said, according to the Belfast Telegraph. "He just sees something that's great. For him, Elsa is a superhero."

Dexter and his dad's actions, intentionally or not, confront toxic masculinity head-on. According to Teaching Tolerance, the term toxic masculinity is the culmination of studies on male violent behavior. It describes not actual masculinity, but the behaviors that come about when expectations of “what it means to be a man” go wrong. Another definition, provided by The Good Men Project, is "a narrow and repressive description of manhood, designating manhood as defined by violence, sex, status and aggression." The toxicity comes from culture having a specific definition of manliness that values strength and frowns upon emotions — which are considered feminine.

By embracing his son's interests, regardless of whether society deems them "appropriate" for a young boy, Burøe is teaching Dexter that it's OK to define his own masculinity. And Burøe's post prompted an important conversations in the comments section of his post.

It began when one person wrote on the Facebook video, "THIS is what healthy masculinity look like." Another responded by questioning if what Burøe and his son are doing in the video qualifies as a "masculine" act — spoiler alert, it does. At that point, a third person interjected to explain that the conversation was turning toxic. "Wondering whether something is masculine or not instead of just doing whatever you want and have fun is TOXIC MASCULINITY," they said.

To make the point a bit clearer, another commenter broke it down even further: "I would think that a father fully engaging with his child to the point of dressing up as a favorite female character and dancing with his child because it makes them happy is one of the best examples of masculinity I’ve ever seen; he’s too busy being dad to worry how he looks to anyone besides his kid."

And if all of these adults debating masculinity aren't making it clear enough for you, even a child can understand that a dad can wear a dress — as long as he properly accessorizes. "I showed this to my 5year old daughter, only thing she noticed: 'where is the dad's crown?!'" a commenter said.

Prompting this kind of important conversation is just one part of what Burøe is aiming to do as a dad. Ultimately, as he told CBS News, he wants Dexter to feel free: "It's important to teach children that you can do whatever you want to do, and not put prejudice all over them. Soon enough you will find out who you're going to be in life."

And as for Burøe and Dexter, they're going to be the ones dancing.