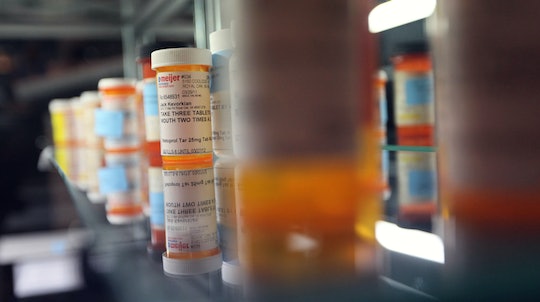 Being a parent is a beautiful and terrifying thing, as just about any parent will tell you. And now, this dad is warning other parents after his daughter's tragic death, which he says was totally preventable. Because, unfortunately, life can change in the blink of an eye, and even the most responsible of parents or guardians can see their child taken from them too soon.

Such is the case for Jordan Magill, of Silver Spring, Maryland who recently wrote an essay for The Washington Post about the $50 purchase that could have saved his daughter's life. Tragically, Magill's 12-year-old daughter got a hold of his prescription medications and overdosed on them, ending her life. And as painful as that has been, Magill also explained that if he or his wife had simply purchased a locked medicine cabinet — which usually costs about $50 — their daughter might still be alive. Magill's essay doesn't make clear whether his daughter's death was suicide, as he himself is still unsure what drove his daughter to take the pills in the first place:

We will never know what she was thinking. Why she took those drugs. Why she vomited. These unknowns haunt us. Her social media was unremarkable, rife with all the usual drama of adolescents. We will never know that “why.” The question haunts us, and still we have no idea.

According to Magill, his daughter might not have known the full extent of the impacts of the pills she was taking.

A day earlier, sometime around 5 p.m., our daughter swallowed a palm full of my prescription anti-depressants, more than 10 times my daily dosage. Right after, she vomited. That evening, she told her friends and us about vomiting. Like any parent, we took her temperature (normal), got her some fluids (ginger ale), and put her to bed early.

She never told us about the pills. Critically, this particular drug is time-release. Once capsules rupture, the medication cannot be purged. Vomiting does nothing to rid the body of the poison, a fact to which we are sure she was ignorant (since we were).

After Magill's daughter went to bed that night, the pills took hold, and she went into a coma from which she never came out.

And this isn't an isolated incident. While many recognize that the United States is experiencing a horrific opioid epidemic currently, prescription medications in any form can be extremely dangerous, especially when they're around children or teenagers. According to CNN,

And while Magill's daughter was only 12 when she died, her death is still important. As Magill wrote,

Her brain was a teenager’s brain. Despite abundant cleverness, she lacked an adult’s grasp of consequences. Mature decision-making was still eight to 12 years away. Emotional tumult often rules teenagers’ lives. Things that, for an adult, might seem minor, even trivial, can provoke terrible actions.

Truly, whatever provoked her decision to take the pills is almost irrelevant to Magill. What matters is that it could have been prevented.

For the most part, Magill is upset that so many of the warnings parents get are all about the dangers of having young kids. And while those are certainly valid, there's a lapse in guidelines for older kids and teenagers. But, as he also notes, there are definitely too many children who get there hands on prescription pills:

Fortunately, Magill has decided to share his story in an effort to try to prevent any more from happening. He and his wife have purchased a medicine cabinet with a lock, and it's stored in a secure location. But, the pain of losing his daughter has made one thing very clear to Magill: when prescription pills are involved, there is no such thing as being too safe.