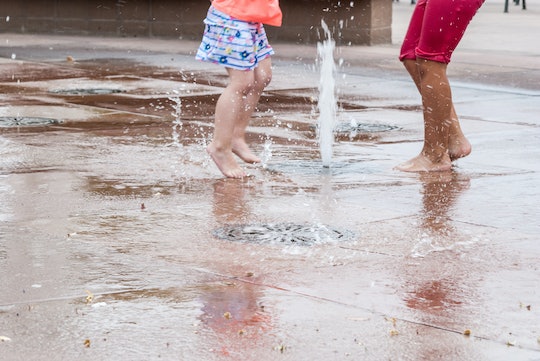 Splash pads — aka water playgrounds — are supposed to be safe. Most splash pads, for instance, are designed with an anti-slip coating, and they have little to no standing water. But as welcoming as splash pads might appear on the surface, these recreational areas may pose hidden risks. This week, one dad is warning parents about a possible hazard after his toddler allegedly suffered second-degree burns while playing in a splash pad in Seattle, Washington.

UPDATE: Rachel Schulkin, a communications manager for Seattle Parks & Recreation (SPR), tells Romper in an email that SPR is "looking into the feasibility and cost of rubberizing various spray park surfaces," in an effort to make its splash pads safer. Additionally, Schulkin advises visitors to "please wear shoes at spray park and playground facilities."

Andrew Sechrist, a dad to a 1-year-old son named Jackson, reportedly had a scary experience at Georgetown Playfield's splash pad on July 26, as Q13 FOX reported. At some point during the outing, Sechrist's son started crying for an unknown reason. Although Sechrist assumed his son injured himself from a fall of some sort, according to Q13 FOX, he soon realized the situation was a lot more dire.

"I saw Jackson off to the side, about five feet from a water toy. I ran over, thinking he had fallen, to console him," Sechrist told CafeMom. "I picked him up and took him to a different section of the water area, but he was still inconsolable." Sechrist did not immediately respond to Romper’s request for comment.

When Sechrist inspected Jackson's body, he was shocked by the physical state of his feet. "His feet were white, the skin, they had basically melted. He had second-degree burns on the bottom of his feet,” Sechrist told Q13 FOX.

If you're wondering how Jackson allegedly got his injuries, Sechrist suspects the splash pad's metal grate is to blame. Most splash pads have metal grates (grates provide access to the play area's pipes), and many parents don't think twice about this fixture. The problem? Metal grates can get *really* hot throughout the day, especially during a heat wave. When Q13 FOX tested the metal grate Jackson allegedly injured himself on, the recorded temperature supposedly reached about 130 degrees. It's also important to note that Q13 FOX carried out its experiment during the same time of the day when Sechrist visited.

Sadly, Jackson has endured a lot since his alleged injury. Not only did Jackson have to spend a night in the hospital, but he also has to "wear bandages that go up to the bottom of his knees for the next 10 to 15 days," Q13 FOX reported. "If I could switch places with him, I would in a heartbeat," Sechrist said about his frustration, according to CafeMom.

The good news? There's a solution out there that could help other kids avoid this dangerous situation. Following a similar incident in Ontario, Canada back in July 2015, some experts brought up an important point about rubberized paint. "We didn’t need this story to come up to know that those lids get hot," Aydin Sarrafadez, Manager of Aquatics for Toronto Parks, Forestry and Recreation, told Today's Parent one year after the terrifying ordeal that left a 1-year-old toddler with second-degree burns and a minor hand injury. "We started using a rubberized paint that is less absorbent of the heat of the sun, and painting them with bright colors.”

In the meantime, parents should advise their children to avoid metal grates while playing. And if your child is too young to understand, perhaps skip your splash pad altogether until you think it's safe enough to visit. As Sechrist learned, it's always important to be vigilant.