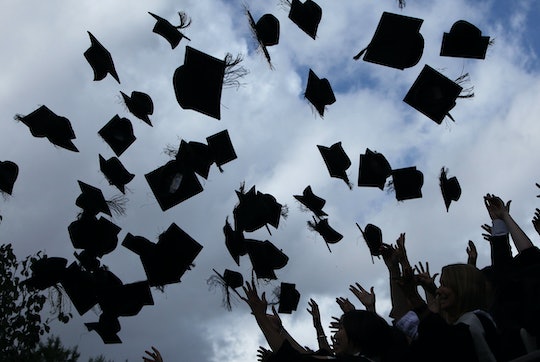 This Dad Majorly Goofed At His Daughter's Graduation

Dads do the darndest things. They crack far too many corny jokes, usually with any waiter at any restaurant. They’re known to Google what the latest slang words mean. And they pros at embarrassing their kids in every public settings. It’s just how dads are, which is why it’s not entirely shocking that this dad majorly goofed at his daughter’s graduation — and the internet can’t stop laughing at what’s possibly the most epic dad fail of the year.

Georgia Wilde was walking during her graduation ceremony at the University of the West of England and her dad was supposed to be filming this milestone for her to keep for years to come. But instead of recording his own daughter during the procession, her dad mistakenly filmed the wrong girl. Wilde shared the moment on Twitter earlier this week, and you could easily watch the hilarity that ensues for a solid day on repeat.

In the 11-second long video, Wilde calls her dad out for filming another graduate and tells him, "that's someone else." Once he realizes his goof, both Wilde and her dad immediately start laughing at the mix-up.

"I got carried away then," her dad said as he chuckled. "I was looking at the wrong one, weren’t I."

"My dad legit filmed the wrong girl going down the isle [sic] at my graduation," Wilde wrote on Twitter. "Sums up my Dad."

That's pretty good stuff, but there's more. A day after she posted the hilarious footage, she shared on Twitter that this is especially funny because she was graduating with a degree in filmmaking.

"What's ironic about this whole video is that I was graduating from a 'filmmaking' degree!" she tweeted.

The video quickly went viral on the social media site and has been re-tweeted more than 24,000 times and has gotten more than 74,000 likes since Thursday. Basically, the internet can't get enough of it.

Before the post went viral, people commented that it definitely should get such attention. But, while Wilde was excited by the prospect, she wrote that her dad "would probably kill [her] for showing him up on the internet."

Well, as history has proven, the internet knows what it likes and this video is internet gold. And here are some of the best reactions to it thus far:

Aside from going viral on social media, Wilde and her dad have been featured in many news stories, including the BBC and several other British media outlets.

Thankfully, both Wilde and her dad have a great sense of humor and were able to just laugh off the whole mistake. And fortunately, for the rest of us, there's video evidence that will forever live on the internet and we can revisit this whenever we need a quick pick-me-up.

So, Mr. Wilde, thanks for being the daddest of dads.

More Like This
Reddit Backs Mom Who Got Scolded By Teacher For Not Inviting 30 Kids To Birthday Party
Sally Field Is The Ultimate Cool Mom Who Once Tried To Set Her Son Up With An Olympian
10 Great Podcasts That Will Keep Your Kids Entertained On Your Next Family Road Trip
Marie Kondo Gives Up Tidying Post-Kids, Sparking Joy For Moms Everywhere
What Parents Are Talking About — Delivered Straight To Your Inbox