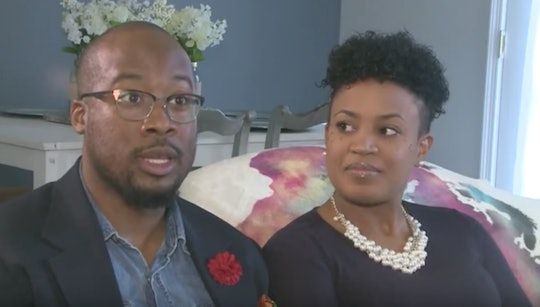 The age-old saying goes, "bad things come in threes," but that isn't always the case. There is a lot to be learned from things that come in multiples — especially when those multiples are children. The lessons learned from having two babies at once are indispensable because parents pick up on how to multitask very quickly. But having multiples takes a lot out of parents, too. So it is no surprise that this dad of twins had the most hilarious reaction to having another set of multiples, knowing very well just what will come next — a lot of diapers and a lot of crying.

Nia and Robert Tolbert of Waldorf, Maryland, know very well what it is like to have multiple young children running around their house at the same time. The couple is parents to 6-year-old son, Shai, and 2-year-old twin boys, Riley and Alexander. The couple thought that they were done expanding their family after giving birth to their sons in 2015, until two years later when they found themselves in for a little bit of a shock. Nia told People:

... we were in for a surprise. Robert and I have always joked about having a large family, but we did not plan to have any more pregnancies after the twins.

That was, until Nia found herself pregnant and discovered something pretty exciting during a routine doctor's visit in August. Nia told ABC News:

When we were expecting twins, our technician that was doing the ultrasound asked if multiples ran in our family. So this time around, the technician asked the same thing, and I thought, 'Oh we must be having twins again.'

But, the news was even more shocking: Nia found out that she and Robert were expecting triplets.

Nia was surprised herself, telling ABC News that "everything kind of spiraled out of control," in a good way. But nothing compares to her husband's reaction, which was definitely different than his wife's.

Nia decided to tell her husband she was expecting triplets with a present and a handwritten note telling him that he was going to be a father to three more children, according to ABC News. When Robert read the note he fainted, he told ABC:

I opened the bag and saw a very, very long sonogram. Then I saw three onesies in the bag...and they were numbered 1, 2, and 3. I was just shocked. I just went straight to bed.

While this is hilarious, it is just a tad dramatic. It is not like Robert will be giving birth to those triplets (that's much worse) or has to carry them for nine months. Let's be real: of the two jobs, he got off easy, comparatively (although raising the triplets is work definitely worth fainting over, whether you're a mom or a dad).

The good news is, according to ABC News, the parents of three boys are expecting three girls on the way, therefore their new household is going to be "equally balanced." Although doubling their family with one pregnancy may seem daunting, Nia told ABC News that the family is ready for what is to come next. "I know we're not going to sleep for a couple of years, our grocery bill is going to go up, and our house is not going to be quiet, and that's OK."

Having multiple multiples, back to back, is actually pretty rare. According to CBS Baltimore, doctors say that the odds of being a 1-2-3 parent, or giving birth to a single child, then twins, then triplets, is less than 1 in 1,000. Live birth statistics from the Centers for Disease Control and Prevention from 2015 reiterate this rarity. Giving birth to twins in the United States is quite common — there were 133,155 twin births in the United States in 2015. But there were only 3,871 triplet births that same year, according to the CDC. A Pew Research Center report from 2015 pointed out that there has recently been a spike in multiples, with more women in the United States giving birth to multiples now than ever before.

While there might be double the noise and dirty diapers in the Tolbert house come this March, now that the initial shock has worn off, it seems like the family is more than excited for their new additions.