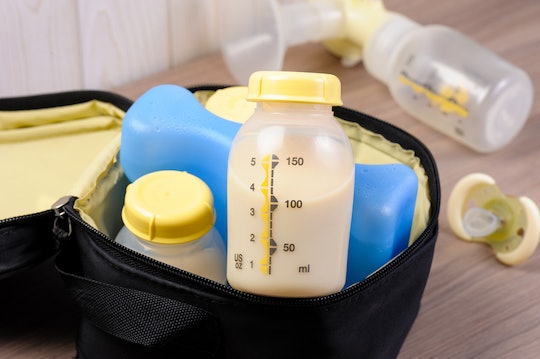 This Dad Says TSA Threw Out His Wife’s Breast Milk, & His Story Is So Frustrating

Of all the hassles that comes with air travel — taking off shoes and coats, awkward pat downs, overpriced lattes — one thing that shouldn't be a concern is whether you will be able to feed your little one. This dad on Reddit says TSA threw out his wife's breast milk and he wants to know why. Although it was a one time thing for the family, this is an all too common occurrence.

The unnamed dad in this story, who goes by "Tamachan5" on Reddit, posted to the subreddit dedicated to breastfeeding, detailing his recent interaction with TSA that resulted in confiscated breast milk and looking for explanations. He wrote:

Wondering why mother's milk was tossed by TSA and why they considered it 'dangerous' when we had passed though security several times with milk and had no problem before.

He went on to explain that this sort of interaction with TSA was distinct from the rest of his trip, including stops in Dallas, San Antonio, and New York City, where he was treated very well and the milk passed muster. It wasn't until an unspecified airport on the "last leg" of his journey that TSA decided to get rid of his wife's milk:

So, TSA decided that my daughter's lunch was dangerous and had to be discarded, Mind you, until that particular incident, we were pleasantly surprised by the good service and common sense by the agents in all our interactions with them during our trip.

Tamachan5 went on to explain that the baby was not even allowed to drink the milk in question rather than have it thrown out. He then asked why this specific bottle of milk was an issue:

So here is the question: why, if the same expressed milk from my wife was used, in the same bottle, in the same container and with the same ice packs, on different dates, and we did not have a problem before, did they throw [away] this particular milk?

It is worth noting that without knowing the exact airport in which this exchange took place, Romper is unable to contact the airport in question to ask just why Tamachan5's wife's breast milk was thrown out. But this post does bring up an important problem with airports in general. Traveling with breast milk has long been a complicated process for parents, despite the simple instructions from the Transportation Security Administration:

Formula, breast milk, and juice in quantities greater than 3.4 ounces or 100 milliliters are allowed in carry-on baggage and do not need to fit within a quart-sized bag ... You do not need to travel with your child to bring breast milk.

Families are supposed to be able to travel with an unlimited supply of breast milk, per TSA. But given the number of complaints about this issue on Twitter this month alone, I would say that it is still a problem.

These rules and regulations were put in place by the TSA to protect parents, according to the Washington Inquirer, but issues remain with compliance. Stories such as Tamachan5's still pop up without apparent cause for the confiscation. In order to make the rules easier to follow and enforce, the House passed a law last year called the Bottles and Breastfeeding Equipment Screening (BABES) Act, which requires TSA employees to undergo proper training for handling breast milk.

When proposing the bill on the House floor, Republican House Rep. Jaime Herrera-Beutler, from Washington, explained the need for it, according to the Washington Inquirer, saying:

There have been too many instances reported by parents that TSA officials either didn't know or simply refused to follow these exemptions. Parents who are trying to follow these rules are consistently singled out for harassment-like scrutiny by the TSA. This has led to breast milk being forcibly tossed out, equipment being broken, and flights missed.

The BABES Act is progress towards making traveling with breast milk a stress-free process, but even a year later the status quo is far from perfect. To avoid having your own breast milk thrown out, check out these 10 tips for flying with breast milk, according to ChildrensMD.org. Included are recommendations on packing a cooler, classifications for breast pumps (hint, it's a medical device rather than a personal item), and much more.

Thankfully, Tamachan5 shared that his family arrived at the airport plenty early and his wife was able to breastfeed the baby in a comfortable nursing room. One happy ending doesn't nullify the bigger problem, though. Here's hoping that TSA has a sharp learning curve when it comes to inspecting breast milk. Hasn't the organization heard? That stuff is liquid gold.