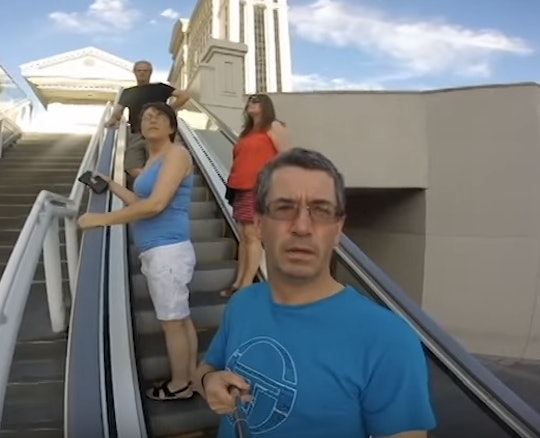 They give us horrible jokes and high-waisted pants and cargo shorts. They wear socks with their sandals and think 5 Seconds of Summer is a new sex position, and then they feel awkward about having talked about sex in front of you. They're dads, and they're pretty awesome. Joseph Griffin, Irishman and bona fide ~Dad~, is one of those dads and, like most dads, he had a difficult time trying to figure out that silly thing called technology. He attempted to document his vacation in Las Vegas with a GoPro and, well, couldn't figure out how his GoPro actually worked. The result? This dad had his GoPro pointed in the wrong direction, documenting Joseph's reactions to his vacation, and not the vacation itself.

(Aren't dads just the best? They really are. Bless all the dads.)

His son (obviously) posted the GoPro footage to YouTube, highlighting his father's blunder. Honestly, what are children for if not publicly illuminating their parents' failures?

I think this all works out to be a total win, to be honest. Sure, technologically-inept Joseph didn't get the vacation footage he wanted, but the result is endearing and pretty adorable and one of those moments when we can point and laugh at parents (instead of begging them to give us some of their credit or asking them how to thaw poultry).

Internet, I give you Joseph Gordon, in all his GoPro goodness.