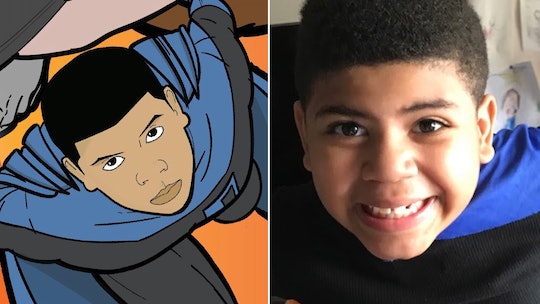 "He was always into superheroes. He was always drawing superheroes. They were all he ever wanted to talk about," Led Bradshaw, an artist from Brooklyn, New York, tells Romper over the phone on Tuesday. Bradshaw is speaking about his 8-year-old son Jake, who is currently in third grade. Jake was diagnosed with autism at the age of 4, and together, the father and son duo created a superhero universe that has helped Jake — and numerous other children — learn fundamental school subjects.

Romper spoke with Bradshaw to learn more about Jake Jetpulse, the superhero who Jake created at 4 years old, and who became the star of Bradshaw's educational comic books. Jake had a hard time learning his schoolwork after his diagnosis, Bradshaw tells Romper, and he did endless research to figure out ways to help his son.

"I googled everything I could find about autism, and I found something about art therapy. So I figured, let me give it a shot…" Bradshaw says. It was a natural choice, since he himself has been an artist his entire life. "I started drawing with him a couple hours a day. I figured maybe if I could just sit down with him — I was trying anything."

As their father-son drawings sessions progressed, Bradshaw discovered that Jake's superhero obsession had made its way into his art. "I noticed that he started drawing himself as this superhero, who swooped down and saved the day, and had his own little superhero team. And I thought that was amazing... I noticed he was really good at storytelling," Bradshaw recalls.

Like any proud parent, Bradshaw saved all the drawings his son made. He had also been getting copies of the daily schoolwork from his son's teacher so he could help teach his son the lessons. One fateful day, Bradshaw came up with the brilliant idea to combine course concepts with Jake's drawings of Jake Jetpulse and the Jetpulse squadron, in an attempt to make the lessons more interesting.

The idea was a success. Jake's reading levels improved thanks to flashcards that his dad made, which featured drawings of Jake Jetpulse and sentences about him (i.e. "Jake Jetpulse can fly") to help him learn to read. Over time, Bradshaw parlayed these methods into educational comic book panels, which Jake would read on his own.

Not only was Jake a fan of learning from Jake Jetpulse, but so were his classmates. "His friends also started to like what I was doing too, so I figured, let me help them too. And I made a character for everyone in his class," Bradshaw tells Romper. The teachers and parents kept asking Bradshaw if he planned to continue making stuff, because all the kids really enjoyed it.

From there, Bradshaw came up with the idea to start publishing his creations. He created a website, JakeJetpulse.com, where select worksheets are available to download and print for free. He also turned the stories into three The New Adventures of Jake Jetpulse books, which are all available for purchase on Amazon: Reading & Language Skills Comic Workbook, Reading & Math Skills Activity Book, and Trolls Vs. Goblins, which just came out this month.

Above all, Bradshaw wants to make Jake's involvement in the books clear. "These are all Jake's characters. He created them when we would sit and draw together. He created his own superhero universe," the proud father tells Romper. "All I'm doing is translating it and putting his educational schoolwork in there to help him learn. And it's also helping other children learn as well."

If there any parents out there who think their child would benefit from creating their very own version of Jake Jetpulse, Bradshaw has some advice. "You don't have to be a comic book artist. There are people out there who can't draw and that's OK," he says. "The idea is to be creative and create a bond with your child and that's what it's all about. I like to make it fun." Start by spending quality time with your child, and ask them what excites them — a best friend, a place they like to go, etc. — and use that to build a story together, he recommends.

Additionally, Bradshaw has a message for fellow parents of children on the spectrum, who may be struggling with a new diagnosis. He says:

Parents receive autism diagnoses every day, and what I'd like to say is, that you're not alone. I know what that feeling is, and there are wonderful things that come from these children. From meeting so many parents of children on the spectrum ... there's something wonderful about these people, and it's been an honor so far helping to unleash the inner hero out of these kids.

Additionally, the Jake Jetpulse website is filled with resources about autism, Asperger's, ADHD, and other developmental disorders. Being a resource to other parents and children is so important to Bradshaw, and he's so grateful that the books are getting the attention they deserve. "I'm really looking forward to helping as many kids as I can, and encouraging as many parents and children as I can with this project," he tells Romper. "It's really amazing to watch something that came from my son. That's the greatest thing."