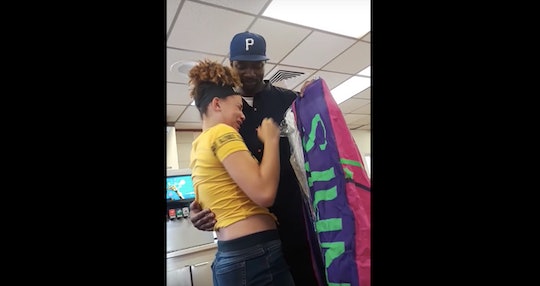 Any parent will understand that when it comes to providing for your kids, there's very little you wouldn't do to make sure they're as happy and comfortable as possible. Parenting is tough and kids are expensive, and it's difficult in any case to have to tell your child that they cannot have something another kid can, just because of financial restraints. But despite the odds, so many parents work selflessly to try to provide for their kids, and it's always so inspiring to be reminded just how far a parent's love will go. Most recently, this dad who works three jobs surprised his daughter with a truly selfless gift for her 8th grade dance, and the internet truly cannot get over it.

On Monday, PopSugar reported that a Twitter user named @PoliteMelanie posted the super sweet moment online on July 27. The 54-second video shows a dad walking up to his daughter and holding out a garment bag. She unzips it, sees what's inside, and immediately starts crying and hugging him for the rest of the video.

"Watch this dad, who works three jobs, surprise his daughter with her dream dress for the 8th grade school dance after telling her he couldn't afford it. This is so emotional," the caption read.

ABC News reported that Nevaeha Smith, 14, found the nearly $200 dress and immediately loved it, asking her parents whether or not it was within their budget. "I looked at the price and I was like, 'Uh, not really sure, but I can see what I can do,'" her father, Ricky, explained, according to ABC News. He then took on even more shifts than he was already working to save up the money to buy the dress. His wife, Kelly Anne, told him to surprise her.

"I was working at McDonald’s that day and I put the dress in the back," Ricky told ABC News. "She came and I brought it out and told her that her grandmother bought it for her and I told her, 'This ain’t the dress you wanted, but I hope you like it.'"

Of course, the major surprise was that it was the dress she wanted, though Nevaeha didn't realize it at first. "I was thinking, 'This is going to be an old lady dress,'" she said, according to CBS News. After realizing what was happening, she was overwhelmed with gratitude, saying: "My heart felt like there was more love in it than there was before. I love him and I’m really happy that’s he’s my father."

On Twitter, the post has been shared over 38,000 times, and liked by nearly 200,000. Responses to it have been mixed, though some people have expressed their awe for the selfless act of kindness one father was willing to do for his daughter, others have pointed out that it's unfortunate a parent has to work that much to provide for his family a basic level of comfort.

"I cried for both. The fact he has three jobs in 2018 to afford to be able to buy his daughter something nice is really preposterous. Meanwhile you have the rich kids getting [BMWs] for gifts and they were expected," one fan response read on Twitter.

"Can we find out who this man is and start a GoFundMe to repay him for the dress. I’ve been where he is now: struggling with giving my child things and having to cut back in other areas. I’m blessed to have family/friends that got me through tough times," read another on Twitter.

Though it remains unclear whether or not anyone has actually started that funding page, what is evident is that people are resonating deeply with this moment, because the unconditional love a parent has for their child will always be the sweetest kind there is.