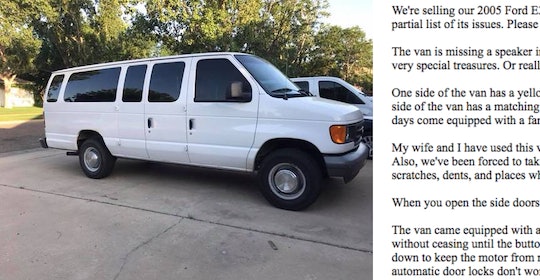 It's possible that only parents know the full extent of what can occur in a car full of kids — from spilled sippy cups of sticky orange juice to much, much worse. And what happens in a minivan, stays in a minivan, right? Not according to Josh Wood of Amarillo, Texas, who has a family including nine kids, one wife and a super-old car that's seen some battles. If you haven't seen it yet, this dad's Craigslist ad trying to sell his family's van will absolutely have you rolling.

The whole thing started out simply enough. Having decided to obviously upgrade his wheels, according to PopSugar, Wood decided that honesty was his best policy in listing his 2005 Ford E350 XL for $3,800, with 143,000 miles on it on Craigslist.

"We're a family of 11. Every one of our children has thrown up in this van at some point in the past decade... The van is clean now; but, it will probably always be inhabited by the ghost of vomit past," the Craigslist ad proclaims. "The van is missing a speaker in the side door. My kids have been throwing random items in the speaker hole for years. So, you may end up with some very special treasures. Or really old chicken nuggets. Probably both."

As Wood continued in his massively long and honest ad:

Later in the ad, Wood includes a "Q&A" to answer any remaining questions about the vehicle up for sale, and this part is so funny, it literally had me in stitches.

For interested buyers who are worrying about the car's upkeep, Wood wrote:

Q: "Have you performed all proper maintenance and religiously changed the oil every 3,000 miles?"

Wondering about mileage, Wood is here to answer your query:

A: ...In efforts to find quicker routes, I've been known to disobey Siri's directions. These "shortcuts" have sometimes taken us on exotic, off-road adventures. I'm pretty sure those miles cancel out all of the so-called "highway miles."

And if you're curious about registration, you're golden, as Wood wrote:

Q: "Is the registration current?"

A: Yes! It should be noted, however, that first three letters of the current license plate are FRT. We have five boys under the age of 12 in our house. This is a very unfortunate combination.

The vehicle — which, apparently, the Wood family calls the "Struggle Van," according to the dad's blog (I so get this car's name) — has even more good stuff to offer a potential buyer: The AC doesn't work, the side doors are messed up and the car was serviced irregularly. That's quite a list of accomplishments for a family vehicle.

And, boy, have parents around the country responded, according to The Wichita Eagle, with many offers to purchase to car coming in, and media outlets from all over wanting to weigh in.

On his blog, Wood has reported that “the van is sold (surprising me and likely all of you), but the deal hasn’t been finalized yet...Believe it or not, I have a waiting list to contact should the deal fall through.” He added that he appreciated the solidarity between “fellow parents and vomit van drivers.”

The story resonates so much with parents, because keeping your sense of humor is so key when you have a family, and it's not always easy. This is one clan, though, that has its funny priorities straight; They also posted a video of everyone in Dinosaur costumes when it was too hot to play outside!

I, for one, absolutely love this story and wish the Woods all the best... and am happy to hear this tried and true van has found a new home. Vomit ghosts and all.