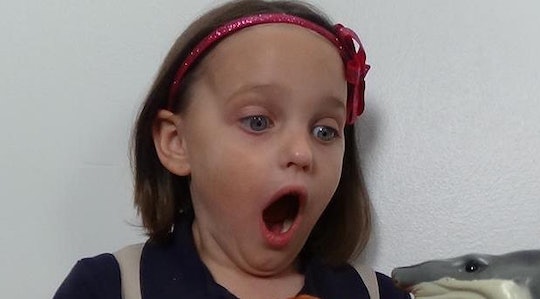 A lot of parents love to share and create videos with their kids and post them to the internet for everyone to enjoy. So at first, this dad's YouTube videos of his daughters might not seem so out of line. But upon closer inspection, the videos are super disturbing for so many reasons. Greg Chism is a single father of two girls and the creator of the YouTube channel Toy Freaks, which had about 8 million subscribers, according to BuzzFeed News, until it was shut down for its troubling content.

Last week, YouTube removed the videos from his channel after they were flagged as inappropriate. Romper's request for comment from both Chism and YouTube were not immediately returned. But a spokesperson for YouTube told Variety, "We’ve terminated the Toy Freaks channel for violation of our policies. We will be conducting a broader review of associated content in conjunction with expert trusted flaggers." The move to remove Toy Freaks comes after a statement last week that YouTube would be enhancing their filters for their YouTube Kids' content, which was what Toy Freak was often classified as.

But was it? The Toy Freaks YouTube channel featured videos, now all removed, of Chism and his 6 and 9-year-old daughters acting like "bad" babies and doing other disturbing stuff. In some of the videos, which were downloaded by BuzzFeed News before they were removed, the girls force feed each other and the spit up on each others' bodies. In one video, the girls pee on each other as the camera zooms into the wet bottom.

In some of the most disturbing ones, the girls are in the bathtub in swimsuits as their dad drops a frog in the water, while the girls shriek and clamor to get out of the tub. In another one, they're teased with an actual lobster, crying out in panic as their father laughs.

We take child safety extremely seriously and have clear policies against child endangerment. We recently tightened the enforcement of these policies to tackle content featuring minors where we receive signals that cause concern. It’s not always clear that the uploader of the content intends to break our rules, but we may still remove their videos to help protect viewers, uploaders and children. We’ve terminated the Toy Freaks channel for violation of our policies. We will be conducting a broader review of associated content in conjunction with expert Trusted Flaggers.

Chism, however, seems to be taking the removal of the videos in stride, alleging that he didn't know some of his videos were in the YouTube Kids category. He said in a statement to Variety that YouTube contacted him out of concern that his videos were "attracting audience members who do not have children’s best interests in their hearts." Chism added:

Many YouTube community members expressed similar concerns, and their willingness to reach out to protect my children and all children from exploitation reinforces my faith in the YouTube community. Victoria, Annabelle and I want to thank our supporters as my girls have had the opportunity to develop their creativity and self-confidence over the past few years. Their future is bright. While it is disturbing to me that anyone would find inappropriate pleasure in our video skits, I deeply appreciate YouTube’s concerns for my family and I could not be happier with having had this remarkable experience.

Chism registered Toy Freaks as Freak World Media LLC and had sister channels with similar content that have also been taken down. The videos were so popular that some people made animated "fan videos" with their girls' and Chism's likeness that are still up. The strangest thing is that people are watching these at all — and that spin off genres are really popular. There's a trove of YouTube videos that are all just adults or even grown kids acting like babies, sucking pacifiers and wetting themselves.

In an interview on YouTube last year, Chism explained how it all got started:

It was just family videos. I take videos with my kids and I post them up there, and just like home stuff, you know, playing in the living room, with toys and everything. I started seeing a pattern — these certain videos were getting more views than the others. ... It's kind of making me some money.

Essentially, the Illinois dad seemingly went from making family videos to analyzing the success and creating videos based on the "bad baby" trope and force feeding each other because that's what was profitable, according to the Daily Mail.

Who knows who was watching the videos or why, but Toy Freaks was the 68th most popular channel on YouTube, according to TubeFilter. The oddest thing is that these disturbing videos, among others, were showing up in YouTube Kids.

Malik Ducard, YouTube’s global head of family and learning content, told The New York Times that videos like these ones, and others such as a video depicting Mickey Mouse getting hit by a car and graphically dying while Minnie watches, are “the extreme needle in the haystack,” but that his team was dedicated to “making the app family friendly."

Taking down Toy Freaks seems to have been one of the more major steps in that direction. Otherwise, it's up to parents to monitor the content their kids are watching and flag, flag, flag every video that seems inappropriate. The internet is a great parenting tool, but there are still way too many dark corners of the web that kids shouldn't ever have to see.