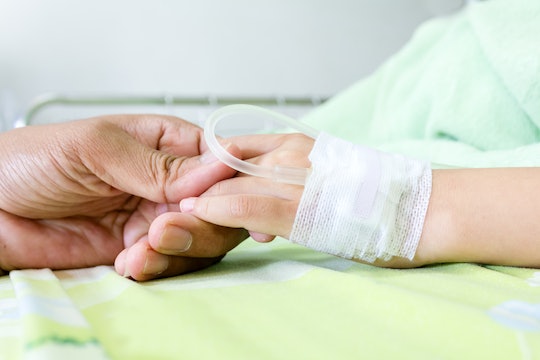 World Sepsis Day takes place today — Wednesday, Sept. 13 — to remind people around the globe about an often-overlooked, but potentially fatal, complication from infection. It can hit anyone whose body is fighting off an infection, yet it's not something many people know much about. This year, however, one dad, Peter Howarth, is sharing his daughter's tragic story as a warning to parents about the danger of sepsis, especially in kids.

In April 2014, as told to HuffPost, Howarth's 3-year-old daughter, Pippa, came down with what appeared to be a common cold. She had a bit of a fever and seemed slightly lethargic, but she was a healthy toddler and didn't show any other symptoms. As he explained, Pippa's parents gave her cold medication now and again, but after a few days, her mother noticed Pippa's breathing seemed slightly off.

At the hospital, Pippa was diagnosed with pneumonia, which can be common in children and the dangers of it are more well-known to parents due to its prevalence. According to HuffPost, Pippa was put on antibiotics and kept at the hospital overnight, where Howarth stayed while his wife went home to look after their two other children.

At 10 p.m., Pippa was "wired up to drips, but still demanding pink drinks and a story," Howarth told HuffPost. But around 3 a.m., Pippa's talking stopped making sense, so Howarth — who's from Manchester, England — had a nurse check on her. As he explained, no one mentioned sepsis, and Pippa and her dad were left alone once again.

"I was holding her hand when she stopped breathing. That was it," Howarth told HuffPost. He continued:

I was hustled out, the crash teams came in. She died before my wife got there. After about 20 minutes I was allowed back in the room, and that’s when my life changed. Sepsis — I didn’t hear that word until she had died. We didn’t get a chance to fight, she was gone before we could try. We didn’t have a chance, she didn’t have a chance. It was a flick of a switch and she was gone.

It's been three years since Pippa's tragic death, but Howarth is still urging parents to become familiar with the symptoms of sepsis and ask their doctors if their child could be septic. Sepsis presents differently in children and infants, and the infection progresses quickly, so it's certainly worth looking into the signs of sepsis early on.

Sepsis occurs when an individual's immune system reacts to an infection. Generally, this immune response, with a cold or stomach bug, is a good thing — and helps rid the body of an infection — but in the case of sepsis, a person's immune system begins to attack itself, as well. According to the Sepsis Alliance, the following signs could indicate septic infection in an infant:

In older children, parents should look for a high fever (over 100.4 degrees Fahrenheit), shortness of breath, rapid heartbeat, a decrease in urine, and general illness.

In the United States alone, over 75,000 children a year develop severe sepsis — and that number grows at a rate of 8 percent a year, according to the Sepsis Alliance. Nearly 7,000 American kids die of the condition every year, and many who do survive septic infection live with ongoing repercussions from the illness, including chronic pain, fatigue, amputations, and organ dysfunction.

"If by doing any type of awareness raising I can help one person ask the question and save one life, that’s one family that doesn’t have to go through the hell we’ve had to go through," Howarth told HuffPost.

Howarth's story is tragic, but hopefully, he can help prevent other parents from going through the same thing. On World Sepsis Day — and any day, really — his story is one worth sharing with other parents to spread this much-needed awareness.