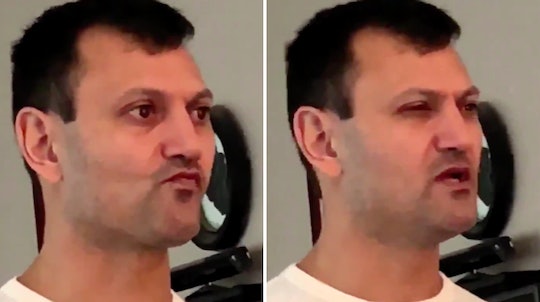 When it comes to holiday traditions, things can get a little tense. But do they ever get as real as this dad's horrified reaction to a fake Christmas tree? I think not. Just in case you missed it, this guy isn't losing his mind because his family put up an artificial tree, but just at the mere suggestion of one. And you thought your family was dramatic.

According to Mashable, 21-year-old Madison Napoli tweeted out a video of her dad listening to his wife's suggestion that they get a fake tree. "And we'll get a Glade candle" to make the house smell like a real one. She even makes the case that the plastic tree could end up being sustainable if they use it for a couple of years in a row.

Madison's father just cannot contain his disdain for the idea. He scoffs in literally the most meme-worthy way ever and then tells his wife, "I don't know what's happened to you," as he walks out of the room. You might note an artificial tree in the background, but Madison assured a Twitter follower that that was for another holiday tradition and that her parents ended up getting a real tree at the end of the day.

Did They Even Have A Choice?

People On Social Media Are Having So Much With His Reaction

According to a poll done in the United Kingdom by the Ideal Home Show, most Brits prefer real trees, like this dad. Only 36 percent of people opted for an artificial tree over a real one. About 8,000 people responded to the poll and commented that the scent of the real tree, the whole endeavor of picking one with your family all together each year, and the shape of the tree were deciding factors.

However, many people added that although they preferred a real tree, they often got a fake one because of affordability and convenience. It really is a personal preference, and unfortunately, it's hard to base the decision on what's more sustainable or not.

Real Christmas trees are raised on farms and meant to be cut down, so it's not a huge travesty to harvest them each year. According to the Canadian Wildlife Foundation:

These trees provide habitat for birds and other wildlife species while the trees grow, and they sequester a significant amount of carbon dioxide from the air, replacing it with fresh oxygen. What’s more, for every Christmas tree that is harvested, as many as 10 new trees are already being grown in transplant beds to take their place in the plantation, making these farms truly sustainable and eco-friendly.

The carbon footprint of a real tree, according to the Los Angeles Times, can be a lot less than that of a fake tree. Think about it: the fake tree is made out of all kinds of plastics, often halfway around the world. Between the carbon emissions that come along with making a fake tree and shipping it to a big box retailer near you, that's a lot of energy.

They also cannot be recycled when you move or decide that you don't want it hanging around your garage for the rest of the year, so it will ultimately end up in a landfill, even if you donate it.

Then again, people keep their artificial for years and years. William Paddock, the managing director of WAP Sustainability Consulting in Chattanooga, Tennessee, which did a study about the sustainability of our Christmas tree habit, told the Los Angeles Times, “Over the course of time, there is a break-even point."

So when it comes to the great tree debate, it's up to every family to do the math and decide what works best for their family. Just, you know, be careful about broaching the subject. Because some people are really, really touchy about it.