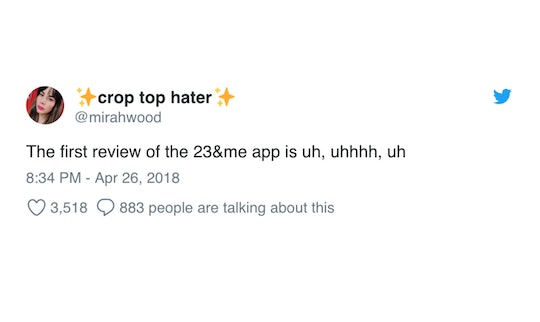 For those who are interested in learning more about their ancestry and/or genetics, 23andMe is an FDA-approved home testing kit that has gained popularity in recent years — and it's a heck of a lot cheaper than genetic testing through your doctor. Consumers simply order one of two kits, ranging in price from $80 to $200, collect a sample of their own saliva, and then mail the sample back to the company. Viola! Before they know it, a detailed report about their ancestry, potential risks for genetic diseases, physical traits, and more are at their fingertips. Sounds pretty cool, right? Well, this dad's reviews of the 23andMe app is going viral because it's a wild ride.

So what does 23andMe look at, anyway? If you're not familiar with the service, allow me to catch you up to speed. According to the company's website, customers who purchase the health and ancestry combo service are tested for their risk for: Hereditary thrombophilia, Parkinson's disease, late-onset Alzheimer's disease, celiac disease, age-related macular degeneration, lung and live disease, among others. Information about wellness, physical traits, and carrier status for certain genetic disorders are also included in the report. Additionally, 23&Me recently expanded its genetic risk profile to include testing for three BRCA1/BRCA2 breast cancer gene mutations, CNN reported.

It turns out one 23andMe customer got a little more than he bargained for when he ordered test kits for himself, his wife, and their son. His five-star review for the app has attracted a lot of attention, and you'll soon see why. "My wife and I took this test and thought it would be interesting to have our son take it too," the dad wrote in the 23andMe app's reviews. "We went through the whole process and when my son's results came back they weren't what I expected. He had no sign of being even a distant relative of mine. I thought maybe the results were incorrect so we took it again and the results didn't change." The dad continued:

I could tell the test was accurate since it was consistent. My wife then told me that he is the son of her psychiatrist. I was furious and depressed. This boy I had raised and paid for throughout his whole life wasn't mine. This test is extremely accurate according to my wife. My wife and I have been distant since this test. We live in the same house, but separate bedrooms.

(OMG. This is basically a horror story. So why did this guy give the app a five-star review, again?)

"I wish this child never existed. I hate myself for thinking this," the review continued. "My life used to be perfect until he took this test. My whole life would've been content if I wouldn't have known, I'd still have my wife and 'son.' I recommend using this product and would use it again."

Screenshots of this crazy tale have recently been shared on social media. And let's just say the Twitter-sphere has a lot of feelings about the situation. First off, many people are convinced the review is fake.

Others pointed out that the kits have warnings on them to prepare customers. For the record, this person's review isn't the first time a 23andMe discovered something surprising about his/her family. Back in 2014, a stem cell and reproductive biologist gifted his parents 23andMe kits — and he wound up discovering he has a half-brother, Vox reported. This ultimately resulted in his parents' divorce.

Still others were distraught that the "father" wished his "son" never existed — even though he raised him all these years.

Others (like me) were just confused about the five-star rating.

I can't even imagine what this guy has gone through — assuming his review isn't fake, that is. What makes this particularly fishy to me, is that the wife would agree to doing the kits in the first place. Because she knew there was at least a chance that her son wasn't the biological child of her husband. Something isn't adding up, here. I'm also mildly distraught that the husband is wishing the child he raised was never born, even if they aren't biologically related. I can understand his anger and devastation, but family means so much more than genetics alone.

For those who might be considering 23andMe, let this review be a cautionary tale. Because your results could reveal life-changing information about who you're really related to.