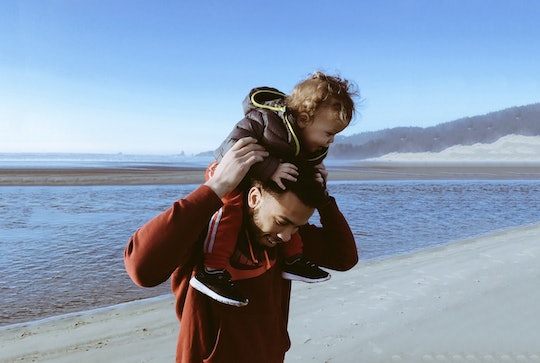 This Dad's "Rules" For Dating His Daughter Are Refreshing AF

The "overprotective dad" trope is long worn out, which is why this dad's "rules" for dating his daughter are so refreshing. Jeffrey Warren Welch, a poet and writer, turned the old-school stereotype of a father laying out "rules" for their daughters right on its head in a simple post. You know the trope well, most likely, as it's been played out in movies, TV shows, and probably even in your own life.

A father sneers that he'll "lock up his daughters" when they turn a certain age or someone at the park conspiratorially whispers about your toddler daughter, "just wait till they're dating..." Gordon Ramsey once said he paid his sons to snoop around on their sisters and report back on their dating lives. In almost every Disney movie, the overprotective dad makes the rules.

This stereotype has to stop. It sends a message to young women that they don't have a choice in what they do or don't do with their lives — as if they were simply incapable of making their own decisions. It assumes that all young men are animals (although no one will believe a young woman when she reports a sexual assault, for some reason). It's also perpetuated racial stereotypes — throughout history, racially charged laws have been enacted in order to "protect" the innocent, often white, young female.

Welch's rules challenge all of that.

You’ll have to ask them what their rules are. I’m not raising my little girls to be the kind of women who need their daddy to act like a creepy possessive badass in order for them to be treated with respect. You will respect them, and if you don’t, I promise they won’t need my help putting you back in your place. Good luck, pumpkin.

Welch told The Huffington Post that his own "rules" were inspired by other posts he saw on social media celebrating this gender stereotype, with people even threatening to injure the young men dating their "little girl." Ugh.

Welch isn't the first father to have some feminist "rules" for his daughters. When President Obama was asked if he was nervous about his daughters dating, he said he wasn't concerned at all. Because he raised smart, capable women.

She's such a great example of how she carries herself, her self-esteem, not depending on boys to validate how you look or not letting yourself be judged by anything other than your character and intelligence. Hopefully, I've been a good example in terms of how I show respect to my wife.

It's a simple flipping of the script, really. If fathers treat their daughters like the capable. smart, worthy people that they are, they'll expect that outside the home, from other men, too. Young girls everywhere could use more that.