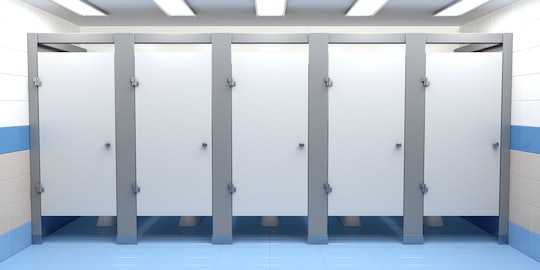 There is something about the total honesty of little kids that is very refreshing, especially for parents. Little kids aren't afraid to tell the truth and won't hold back any emotion they're experiencing. This unbridled, pure emotion is part of what makes talking to young kids so much fun, and sometimes there are stories that remind you exactly why it is so much fun to talk to them. Like this dad's story about his toddler giving him support in a restroom, which will definitely make everyone cry with laughter and hit a little too close to home for some parents.

If you've ever been on a road trip in the summertime, then you know the feeling — that feeling — the one where you need to stop the car so you can get to the nearest public restroom. It's bad enough to do as a solo traveler, but with young kids in the car, it gets even worse. For dad, blogger, and author of I'm Sorry...Love, Your Husband, Clint Edwards, his recent "12 hour road trip" came to an abrupt halt when "diarrhea struck him" during a pitstop at an Oregon gas station — which he documented in the most hilarious post on Facebook, according to PopSugar. Accompanied by his 4-year-old daughter, Aspen, Edwards did what every parent in a panic would do — he brought Aspen in the bathroom with him, because he "had no choice."

But instead of his little girl patiently waiting for him to finish, Edwards' daughter insisted on being a cheerleader for him. "Aspen watched as I struggled, Moana light-up crocs on the wrong feet, blue eyes wide and supportive, hands clapping," Edwards wrote in the Facebook post. "'Good job, Daddy! Good job! You make two poops! Now three poops! I'm four!'"

Edwards continued in the Facebook post, writing that he never felt more encouraged in his life than having his daughter by his side during his time of distress. Edwards wrote:

It is super common for parents to practice positive reinforcement techniques with their toddlers when they're potty training, according to Parents, because it is used to ensure that their children are excited to go to the bathroom again and know that going to the bathroom on their own is a fantastic thing. But, as Edwards wrote, it's rare for those roles to be reversed, with the little kid handing out the praise. Edwards wrote in the Facebook post that his "potty praise" to his daughter always seems a bit normal — "but when the roles are reversed, it's just, well, awkward."

Facebook users not only seemed to agree with this statement but found the entire post to be hilarious. Since posting his story on Wednesday, Edwards' Facebook post has received more than 10,000 reactions, 7,000 shares, and over a thousand positive comments with people relating to the very funny tale. "Kids keep us humble," one commenter wrote.

"I would much rather hear children talking about stinky poop than snobby adults," another commenter added.

There is something about the potty and "potty humor" that fascinates little kids, according to The Conversation. Although their kid inserting the word "butt" into their favorite song or cheering their parents on in the bathroom might make some parents laugh (you're never too old for some immature jokes), it might make other parents embarrassed by their behavior. But, according to Parents, this is all a part of growing up. Toddlers and preschool kids, like Edwards' daughter, make jokes and observations like these because they're learning and trying to comprehend how their body works. Although it might have seemed embarrassing for Aspen to cheer on her dad, this was simply her "coming to grips" with this in every day life, according to Parents, especially since the roles were reversed and she was an observer to her father's bathroom behavior this situation.

It's these simple, every day parts of life that can teach both parents and their kids a very valuable lesson. For kids, when it comes to public restrooms, observations should be kept to themselves. And for their parents, well, maybe taking some medication before they embark on a long car ride might be worth it in the long run.