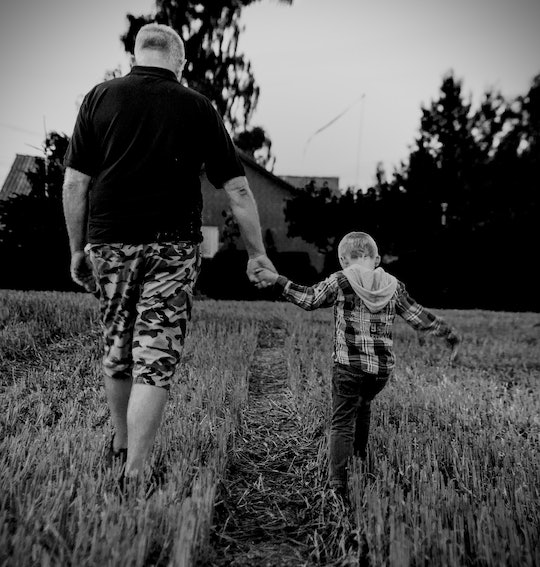 In March 2015, Gabriel Marshall was diagnosed with anaplastic astrocytoma, a rare — and malignant — brain tumor. At that time, Gabriel was just 6 years old. The golf ball-sized tumor was successfully removed from his brain, Gabriel has been out of treatment for nearly nine months, and recent scans show he is now stable, but he has remained self-conscious about his scar. So Gabriel’s dad, Josh Marshall, did what any father would do: Gabriel’s dad got a tattoo of his son’s cancer scar on his own head.

As Josh explained to BuzzFeed, the idea came about when his son called himself a “monster":

This broke my heart. I told him if people wanted to stare, they could stare at both of us.

Josh then submitted a photo of him sporting his new tattoo, while Gabriel proudly wore his own scar, to the annual St. Baldrick’s Foundations #BestBaldDad Father’s Day competition. St. Baldrick's Foundation is a non-profit determined to help fight pediatric cancer, and they do so by raising money and then using that money to fund any/all research, researchers, and clinical trials which will make "the greatest impact for children with cancer."

The #BestBaldDay Father's Day competition is an annual event which aims to highlight those fathers “who’ve given up their hair [to support their child, or a child in their life, who has cancer and who've workd to] raise money for kids’ cancer research,” according to the website. Not only did the Marshalls win the contest, but Alison Sutton — the St. Baldrick’s Foundation’s social media manager — told BuzzFeed it was the first time in the contest's history "where a dad went above and beyond shaving his head in solidarity with his child and got a tattoo to build his son’s self-confidence."

But for me, a child who grew up with a large and embarrassing scar — a scar which runs from my belly button to my armpit — the Marshall's story is beyond "touching." Josh helped to normalize Gabriel's scar and — in a sense — Gabriel's illness, and in my opinion, that is priceless, heartwarming, inspiring, and that's what love is all about.

As for Gabriel, the now 8-year-old still has a bit of a battle ahead: despite having surgery, some of the tumor remains in his brain. But the young fighter has renewed strength and support thanks to his father’s tattoo or, as Gabriel calls him, his “twin.”