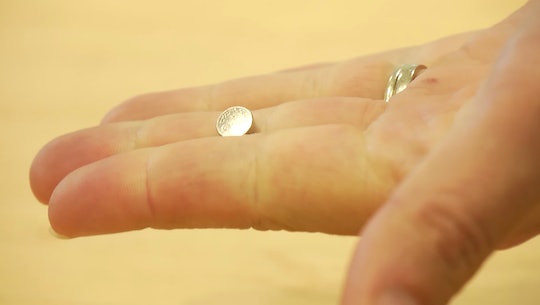 When it comes to the dangers of small household items to toddlers, the most common worry parents have is of choking hazards: many items, if swallowed, could obstruct a child's breathing and cause death within minutes. But one dad's tragic warning about button batteries is a reminder to all parents that even objects that children swallow easily — and mindlessly — can pose huge risks to them.

Working with the Child Accident Prevention Trust to warn other parents, father George Asan recently shared his story about his 2-year-old daughter's death last year. Unbeknownst to her parents, Francesca Asan swallowed a button battery one day in May 2016 — an action that led to her eventual death.

"Unfortunately, we didn't see anything wrong, no signs," Asan said in the Child Accident Prevention Trust video. After she died, Francesca's parents were informed that a small button battery had been the cause of her death. "We found that it was a button battery and straight away I went to the cabinet and we had the 3D glasses for the TV. It was one of the spare batteries, in the original box of the glasses, which was in another box."

It's a common problem: according to the National Capital Poison Center, more than 3,500 people swallow button batteries every year. In 2010, about 3,400 of those were children, according to the Children's Hospital of Philadelphia. Kids get into things — and when they get into batteries, the dangers are very real.

Most button batteries will simply pass through a person's body, according to the National Capital Poison Control Center. However, the danger comes from batteries that get stuck somewhere in the body and then begin to corrode as soon as they touch bodily fluids. When a battery corrodes, it can burn through tissues and cause serious injury. Button batteries that have been put up noses or into ears can also cause permanent damage.

According to the Children's Hospital of Philadelphia, parents should be aware of the following symptoms:

Blood in saliva and stool

Many of the symptoms above can also be linked to common illnesses, which is why it's so important for parents to be aware of the possible dangers of batteries. For many parents, if a child exhibits the symptoms above, the possibility that they may have ingested a battery never even surfaces — which is exactly why Asan shared his story.

"What happened to Francesca proves that you can't be always around," Asan said in the Child Accident Prevention Trust video. "You can't have eyes everywhere. You can't take the freedom of exploring from a toddler — that's what makes them a toddler."

No parent can say that they've kept eyes on their child 24/7, and kids can get into things surprisingly quickly and quietly. Button batteries can be found in all manner of objects, including everything from greeting cards (i.e., those annoying ones that sing) and remote controls, to children's toys and electronic thermometers or scales.

If you think your child may have ingested a battery, get medical help immediately and keep them from drinking or eating anything (medicine included) until you've seen a professional. If you know what kind of battery they ingested, bring that information to your doctor as well. If you have questions, call the 24-hour National Battery Ingestion Hotline at 202-625-3333.

Finally, make sure to let other parents know about the risks of button batteries, since it's the only way we can help reduce the number of tragedies that occur because of them.