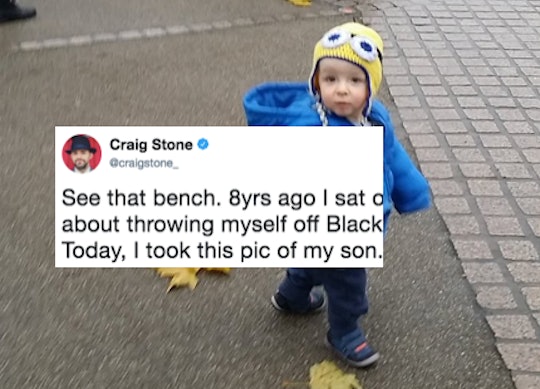 More than 16 million adults in the United States suffer from depression, according to the Anxiety and Depression Association of America. It can be an incredibly scary thing to go through, especially as a parent, knowing just how scary the world can be and what your child might have to encounter along the way. But this dad's tweet about overcoming depression will show you that there is a light at the end of the tunnel and there is so much more to live for. Most importantly, it can bring attention to the fact that men also suffer from depression — even if it's hard for them to admit or recognize.

One tweet and photo can hold so much power. Not only can the 280 characters tell a story, but the visibility of one tweet can gain so much attention from so many diverse people. English writer Craig Stone's story does just that. In a tweet, written on Sunday, Stone tells his own story of one bench overlooking a body of water. "See that bench," Stone wrote. "Eight years ago today I sat on it thinking of throwing myself off of Blackfriar's Bridge."

But Stone did not kill himself and found some light in the darkness. In the photo, in front of the bridge stands his absolutely adorable son and a message that everyone can take to heart:

Within the three days that Stone shared his own story, his tweet has gained more than 23,000 likes and over 7,400 retweets and there could be a good reason why. These types of stories are heartwarming and this message wills people to not give up and keep going, especially during the winter and holiday season when seasonal depression hits its all-time high.

But there is another reason why Stone sharing his story is so important. It is rare for men, especially dads, to share their own stories of depression and mental illness. Stone's words play a role in ending the stigma surrounding men and mental illness — it is OK for them to have these feelings.

Women are more likely to experience depression than men, according to the Anxiety and Depression Association of America. But this does not mean that men don't get depressed. The American Psychological Association reports that 9 percent of men in the United States report having daily feelings of depression, but only one in three of those men take medication to help their depression and one in four of those men spoke to a professional about their feelings.

Yet, even with their apprehension to seek help, men are more likely to take their own life compared to women, according to The Guardian. It is so incredibly important for men recognize that they have depression, although its not as easy as it might be for women, according to Men's Health. This is because many men see sadness or depression as being "weak" and are unable to admit to or recognize troubling behavior.

This is what makes Stone's story all the more important. And in response to his tweet, other men have come out with their own stories about depression and words of support for Stone, and Stone himself has taken to replying to each commenter. "Reading through all of the comments here is a joy," Stone wrote on Twitter.

It is understandable why so many men are reluctant to recognize they have a problem, communicate that, and seek help. But by seeing personal stories out there, they can recognize that they are far from alone and hopefully get the professional help they need. In fact, 80 percent of depression cases can be treated effectively, according to ABC News.

In an interview with indy100 from The Independent, Stone emphasized how important it is for men to talk about their mental health:

Talking is the most important thing. If depression is the bullet people fire through their heads, silence is the gun. The trick of depression is it sucks you down day by day while telling you to tell everyone else that you're on top of the world, until you reach the point where you can't get back to the surface without a little help. The only way out of the pit is to announce that you have fallen. Then look for the hand.

People with depression, especially fathers, have so much more to live for. Stone's tweet only emphasizes this.