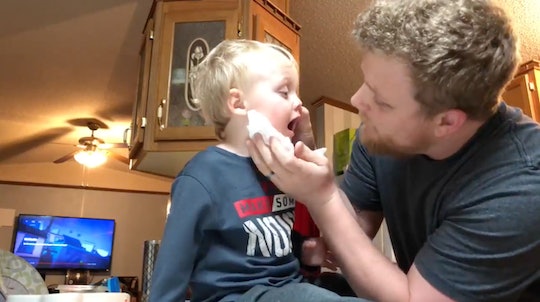 Parents of toddlers know all too well that caring for a tiny human is like embarking on a grand adventure with no itinerary. Sure, you have a vague idea of what you want the end result to be. But the journey there takes unexpected twists and turns, and oftentimes, you're forced to just roll with the punches. It doesn't help, either, that toddlers insist on discovering new and exciting ways of causing themselves bodily harm — such as shoving anything and everything in their mouths. Or in one now-famous toddler's case, inside his nostril. This dad's viral hack for getting stuck food out of his son's nose is both genius and disgusting. And you have to see it to believe it.

Mom Katie Aultman recently shared the video on her personal Facebook page, writing, "So...Jayce stuck macaroni in his nose. Therefore, I had to tell Josh Aultman how to extract it...best vid ever. Hahahahahaha...#diggingforgold" In the video, you can see dad Josh trying to psych himself up for the big extraction. He starts to go for it, hesitates, and then re-groups — all the while, his adorable toddler is giggling his head off. Because of course. But this determined daddy is on a mission: Get that snot-covered pasta out of his little boy's orifice at all costs. Even if it means having boogers shot into his own mouth. And it looks like that's exactly what happened.

"Ahhhh!!" Josh exclaims, before launching into a gagging fit after the deed is done. To add to the gross-out factor, viewers can see the fruits of this dad's labor fall out of his mouth after he successfully sucked it from his son's body. (Jayce continues to giggle, at this point.) "It's not funny!" Josh tells his cackling son. "You shot boogers in my mouth. *Gags* Don't ever put macaroni in your nose again. That's nasty! That'll hurt you." Seems like some pretty sound parenting advice to me.

There are a few things to take into consideration if your child has a foreign object stuck in his or her nose, according to LiveStrong.com. If the object is hard (like a bead,) you should first calm your child and have them breathe slowly through their mouth. If you're able to see the bead, you can try using tweezers to gently retrieve it. You can also try having the child gently blow his nose while you hold closed the nostril that isn't plugged. However, if you're not able to see the object, or if these attempts to remove it at home aren't working, you should immediately seek medical help.

And according to the Cleveland Clinic, parents can try something called the "mother's kiss" method — which is similar to what Josh did in this video. First, you place your moth over your child's mouth. Then, be sure to hold down the nostril that isn't plugged and blow gently into your child's mouth. This gentle pressure is successful roughly 60-percent of the time for hard objects, according to the Cleveland Clinic. For softer objects, unfortunately, you'll probably need to take your child to see a doctor for removal.

By some miracle (fingers crossed it stays this way,) I have yet to deal with the trauma of having a child with something stuck up their nose. However, I vividly remember when my younger sister shoved a plastic bead in one of her nostrils. My parents freaked and took her to the ER, where doctors were able to extract it. I have to wonder if this dad's method would have worked in her case. Because it seems to me that something this simple — albeit gag-worthy — could potentially save a trip to the hospital. Of course, if it doesn't work, then it's best to go ahead and leave it to the medical experts.

In conclusion, toddlers are gross and unpredictable beings. But tell me something I don't already know, right? You have to admit, though: Any parent willing to suck macaroni out of their child's nose exemplifies love in its truest form. Kudos to Josh for taking one for the team and doing what needed to be done.