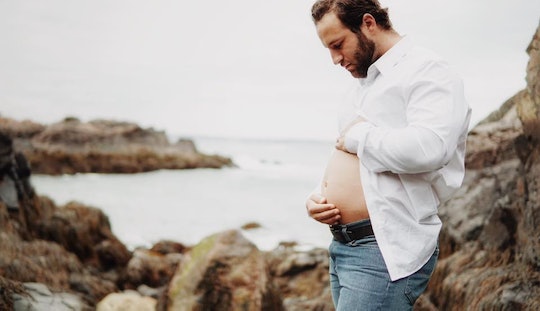 Maternity photo shoots capture pregnancy at its most beautiful parts, but not necessarily at its most honest. Pregnancy is a very long and important time in a woman's life, so why wouldn't they want to capture the prettier parts of that forever? And if a woman can have a maternity photo shoot, then who says her partner can't have one, either? Like this dad, who staged his own "maternity" photo shoot. The results? Well, they're pretty incredible.

If you weren't convinced that men should be allowed to stage their own maternity photo shoots more often, then this definitely will. In a Facebook post, that has since gone viral, expectant dad Nick Roberts detailed how the photo shoot came to be, with the help of his friend, Stephen Cwiok. Roberts wrote on Facebook:

So my girlfriend and I found out we were going to have a baby. So one day my buddy Stephen came to me with the joking idea of doing a maternity photoshoot...featuring me. We rolled it around for a while, then decided it was best to go with it. I felt it was only right to at least try to look a little pregnant, so we grabbed some McDonalds and off we were.

With cheeseburgers in hand and a dramatic backdrop, Cwiok nailed the look completely. And the photos are so worth seeing.

Roberts not only nailed the intensity and drama captured in a maternity photoshoot, but the exact poses that expectant mothers tend to go with to capture their bumps. Except, instead of being pregnant with an actual baby, Roberts was just expecting a food baby. But, according to Roberts' post, this photo shoot brought him "much closer" to his girlfriend, Brianna. Roberts wrote:

If I'm being completely honest, the setting, the occasion, the awful cramps from the double cheeseburgers, it all brought me so much closer to the pregnancy. Now, I'll never know what labor feels like but I feel in my heart it can't be too far away from eating A LOT of fast food. I'm truly blessed to have this eye-opening experience.

Since posting the photos on Dec. 3, the post has gone incredibly viral, garnering over 133,000 likes and more than 91,000 shares on Facebook. Most people have been taking to the comments to tag their friends because these photos are just too good not to enjoy them (or talk about them) with someone else.

The story behind the photo shoot is just as good. Roberts explained to UniLad that the shoot was difficult — not only because they couldn't stop laughing but because he had just eaten "an absurd amount of food" from McDonalds to create that "pregnant" belly. The shoot was done as a surprise for guests at Roberts' girlfriend's gender reveal party, where he made an album of the photos and put it on a table for everyone to see. Roberts told UniLad:

It was everything we hoped it to be. As soon as they flipped the cover to the album, their head whipped back and hysterical laughter began! Not long after, people began to surround the table. Our mission was a success.

Roberts' mission was more than a success — and on Halloween, Roberts and his girlfriend welcomed a little boy named Logan, according to UniLad. While Roberts knew the photos would be a hit with his guests, he told Scary Mommy that he did not expect the internet to love the photos as much it has. "I'm honestly mind blown that it has gotten this big," Roberts told Scary Mommy. "When we first posted them I thought that our friends might think that they were funny...not the whole world."

In a follow-up video, Roberts and Cwiok express their gratitude for everyone who has shared the post, thanking them for their support:

Roberts is definitely not the first person to have a paternity photo shoot. In the past, plenty of dads have gone on to take photos of their own. But Roberts' poses, with the bag of the McDonalds and dramatic backdrop are certainly special and memorable in their own right.

More Like This
How To Tell If Someone Is Lying To You: 34 Signs To Watch For
Here’s How To Combat Performance Anxiety When Trying To Conceive
McDonald's Is Going To Sell Happy Meals Just For Adults So We Never Have To Grow Up
How To Help Families Impacted By Hurricane Ian