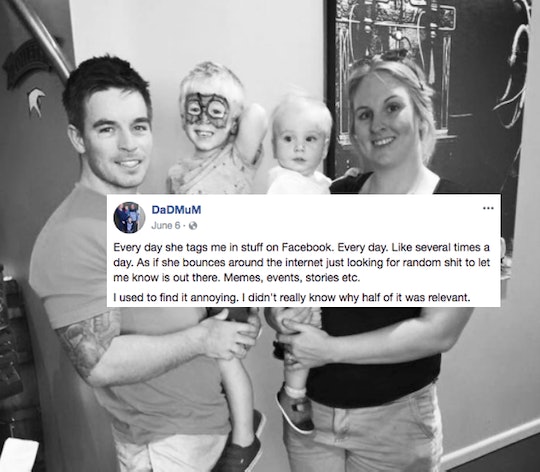 This Dad’s Viral Post About His Wife Tagging Him In Internet Posts Will Make You Want To Tag Someone, Too

Social media has overhauled the way in which people communicate with one another. Posts on social media can launch conversations and spark debates on topics ranging from climate change to cat videos. This dad's viral post about his wife tagging him in internet posts is a must-read — and a must-tag — for anyone who has ever used social media to communicate with someone they care about.

The post originally appeared on the popular Facebook page "DaDMuM" on June 6, but has only recently gone viral as it began receiving more attention. The post begins with a bit of background about DaDMuM's Brad Kearn and his wife's habit of communicating through social media. He explains that his wife tags him in various posts, memes, and events that she comes across throughout the day. Kearn writes:

I used to find it annoying. I didn't really know why half of it was relevant. But over time I've learned that she tags me in sh*t because it's either funny, insightful or relevant to us and our relationship. Sometimes it helps her tell me something because it's so relevant and she couldn't have said it better herself.

Kearn goes on to explain that he does his best to acknowledge every time that she mentions him in the comments of a post and to let her know that he sees them. As he points out in the post, this small act of recognition is so easy.

Aside from just sharing information or a laugh, Kearn said that this sort of communication at various times throughout the day builds the foundation for conversations later in the day:

To be honest it helps me gauge where she's at and what she's looking at online. Sometimes it forms the basis of our conversations when I get home. So often I come home to a "Did you see that thing I tagged you in?" As silly as it sounds it helps us communicate.

Given the kind of relatable content produced on Kearn's page, he is often the author of posts that other women tag their own significant others in. Unfortunately, Kearn shared that other men don't seem to share his sentiments about the importance of reading the posts:

Women tag men in basically everything I ever post. I always see the same reply of "I ain't reading that" or "too long".... that's it.... The conversation goes no further. Whatever message she was trying to send him was rejected because of sheer arrogance and inability to take a few f*cking seconds to read something that was probably important to how she was feeling.

While some of the comments on his post accuse Kearn of taking social media too seriously, many users agreed with his message and mention that they do the same thing with their own partners. One user said that this back and forth is a part of their own daily routine:

Hahaha! Spot on! Hubby and I always tag each other in stuff! It's the online "post it" of today! We always chat about them later or laugh about them together. And it's an awesome way to put hints in for gifts etc too..... sneaky but effective

Another explained that Kearn gets the sentiment behind the tagging perfectly:

Love this! Yep it really is a way that we are trying to share/chat/flirt/joke with him. I love the analogy of the park. Guys, it really isn't that hard to take some time and read. It means a lot to us.

Finding new topics to discuss day after day can be a challenge. If someone is making a genuine effort to start a dialogue with you via social media, follow Kearn's closing advice and "Read the f*cking post!"