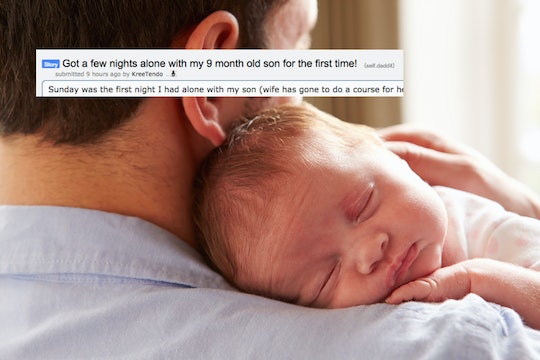 Finding your footing as a parent can be difficult, especially when you have to combat outdated stereotypes. Many dads go through this when they become a parent — too often fathers are depicted or seen as babysitters rather than actual parents. And, unfortunately, this clueless dad trope is regularly perpetuated in the media, which can be devastating to a new dad's self-assurance. If you're a dad who has ever questioned or worried about your parenting abilities, you'll likely appreciate this dad's viral Reddit thread about realizing you're a competent and awesome dad.

The idea that dads simply "help" moms is detrimental on many levels, but especially to fathers who are learning to parent their children. Thanks to gender stereotypes, some dads might not feel capable of taking care of their children alone, a sentiment Reddit user KreeTendo explored in a very honest post to "Daddit" on Monday. KreeTendo revealed that he had spent a few days alone with his son while his wife was away on a business trip, and that he had come to some important realizations during this time. KreeTendo wrote, according to Daddit:

Sunday was the first night I had alone with my son (wife has gone to do a course for her job for a few days), and yesterday was my son's first day at nursery. It's only been a couple of nights but it's made me realise a couple of things. First, I'm finally confident enough to say I know how to be a father, how to look after my child independently, and secondly just how much I love my wife and how much she does! I stay up til about 1 or 2am most nights to make sure he is settled, and she will get up in the night to resettle him if needed. He sleeps amazingly most of the time, sometimes 12 hours through with bottles whilst he is asleep! Not really sure if there was much of a point to my post, other than to say I'm getting the hang of this parenting thing, and also hello to the community here! :)

First off, it's amazing that KreeTendo has found confidence and independence as a parent. It's a big deal, especially since 50 percent of dads don't feel ready for fatherhood, according to NPR. Dads are often led to believe that parenting isn't a skill that will come naturally to them like it would to a mom. Dads are more than capable of raising their children, though, and it's awesome that KreeTendo has found his own groove.

It's also nice to see a parent complimenting the hard work of their partner. It's all too easy for partners with kids to take one another for granted, so it's great that KreeTendo is giving credit where credit is due.

This is awesome! Congrats!!

When my youngest was 6 months I had a surgery that required me to stay home 1 1/2 weeks. After the first day our sitter got the flu so he had to stay home with me. My oldest (who I love with all my heart, he knows he is my little buddy) is a mommy’s boy. Dad will do for most but when it comes down to it, he wants Mom. Baby dude is the complete opposite. I walk in the room and he smiles. If he is melting down, seeing me cheers him up. And when mommy can’t settle him down, it’s daddy in for the win. Use this time my friend. You can forge that same bond. It’s awesome. I am a lucky dude. You can be one too!!

As frustrating as it may be, hurtful stereotypes about dads are still as common as ever. Things have become so concerning and problematic, in fact, that in July, Britain's Advertising Standards Authority (ASA) officially banned ads from depicting hurtful gender stereotypes, according to The New York Times. Britain's recent ban proves that sexist parenting tropes in the media are a real and troubling problem that affect countless families.

Sadly, dangerous parenting tropes also persist via parents who might be hanging on to outdated ideas, like the notion that dads play no part in the nitty gritty of raising kids (diapers, feedings, etc.). Former Bachelorette star Ali Fedotowsky slammed that sexist belief in July during a discussion about co-parenting with her husband, Kevin Manno. Fedotowsky said, according to Fit Pregnancy:

When people ask, ‘Does your husband help?’ I’m like, ‘What do you mean?’ Why do people assume the baby is Mom’s job?

More than anything else, KreeTendo's post is an important reminder that society needs to put more work into combatting sexist parenting tropes — it goes without saying that all parents should feel confident and capable when it comes to raising their children.

More Like This
Parents Have Thoughts After Court Orders Nursing Mom To Use Bottle In Custody Dispute
6-Year-Old Boy Has Zero Regrets After Ordering $1,000 Worth Of Food On Grubhub
Florida Teachers With “Unvetted” Classroom Books Could Face Felony Charges
Trans Youth Describe The Importance (& Joy) Of Family Support In Moving New Documentary
What Parents Are Talking About — Delivered Straight To Your Inbox