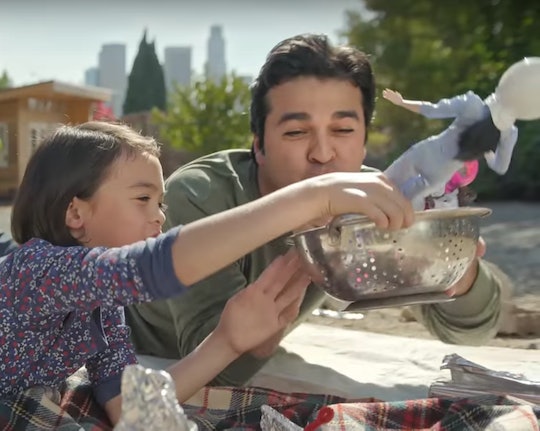 These Dads Playing With Barbies Will Melt You

On Sunday night, nestled into the NFL playoffs ad lineup was a commercial about... Barbies. No, it was not a fluke, and it was actually aimed at dads even more than their daughters. And even though it may have initially seemed out of place, the "Dads Who Play Barbie" commercial was an ingenious marketing move, not to mention an adorable little montage that will tug at all your heartstrings. Featuring real dads with their young daughters, the spot capitalizes on the emerging theme within the Barbieverse that girls can grow up to be anything they want, and that their fathers often play a key role in getting them there.

All of the interactions between the dad-daughter pairs and their Barbies in the commercial are unscripted, and it shows. Their dolls are astronauts, yoga instructors, doctors, and math teachers. "I love playing Barbie, but I only play with Ken," one dad tells the camera. "Ken only." In the next scene, his decidedly not Ken girl Barbie is jumping around while he begs his daughter to save the doll from an imaginary fire in a ringing falsetto. But being present for their daughters, and doing what they like to do, is the whole point. "You would do anything — anything — to make her happy," another football-loving dad says.

As part of Barbie-maker Mattel's "You Can Be Anything" campaign, the ad coincides with the company's push to sell Barbie play sets "curated to celebrate the special bond between a girl and her dad," CNET reported.

Still, it's not just some soulless ploy to get consumers to purchase ever more toys. Mattel's general manager for Barbie, Lisa McKnight, told Fast Company that the company really aims to get the dads to "buy in," not just buy. That's because the basis for the campaign hinges on research out of Wake Forest University that shows how important the father-daughter relationship is for a young woman's future. Researcher Linda Nielson wrote in her paper "How Dads Affect Their Daughters into Adulthood":

...daughters whose fathers have been actively engaged throughout childhood in promoting their academic or athletic achievements and encouraging their self-reliance and assertiveness are more likely to graduate from college and to enter the higher paying, more demanding jobs traditionally held by males,.

"We think it's important to shine a spotlight on all of the role models in a young girl's life that help to build self-worth and self-confidence, including men," Barbie Vice President of Global Marketing Communications Kristina Duncan told Adweek. And with its effort to normalize dads playing Barbie — or just to remind them that it is an activity that they can enjoy along with their daughters — Mattel is helping to do just that as it seeks to sell its products, too.

And because girls can be and do anything, there's no reason they can't join their dads in cheering for their favorite professional football team, as well. While they do that, they might just catch another "You Can Be Anything" commercial, as well.