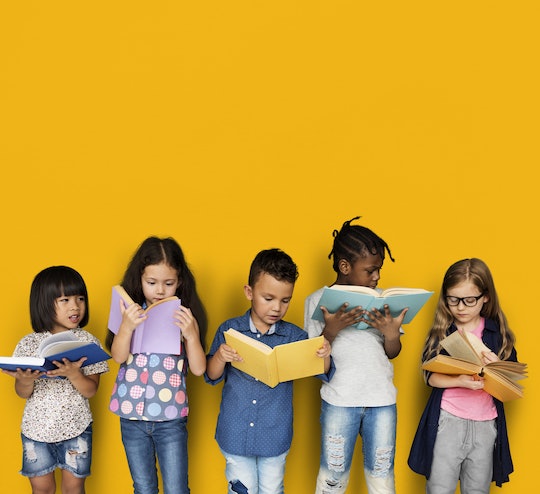 Parents: Use This Handy Database To Find 1,300 Diverse Books For Kids

There are a number of benefits that come from reading with children, not least of which is widening their understanding of the world. Kids place themselves in the books they read and can find themselves in characters. Unfortunately, that isn't so easy for all kids to do. But, with the help of this database, parents can find diverse children's books, because representation for every child is so important. By reading inclusive, meaningful books, children can tackle issues that matter and find their place in the world, and finding books that'll help them with that has gotten so much easier.

The Diverse BookFinder has compiled 1,300 books on important topics including immigration, LGBTQ stories, and environmental conservation. Created with the help of Bates College and the Institute of Museum and Library Services, the books in the database are filled with minority characters aimed towards representing all children, according to HuffPost.

Krista Aronson, associate professor of psychology at Bates College, and Anne Sibley O’Brien, children’s book author and illustrator, co-founded the database with Brenna Callahan, according to the database's website. These women also partnered with librarians Christina Bell and Deborah Tomaras to get the database online.

This team has been working together since 2014, searching for books that allow a more diverse group of children to see characters like themselves represented in literature. Diverse BookFinder is divided into categories for easy searching and parents also have the option to use "quick lists" of books that emphasize topics, such as adoption and activism. There is also a handy search tool that parents can use to find books including their child's interests, such as horses and firetrucks.

In order to prepare children for what they may face in the future, parents can arm them with knowledge gained from children's books that address real life issues. And immediately, it can help facilitate a good nightly routine. But, ultimately, creating culturally aware children who are capable of understanding diversity is part of bettering the world they live in.

All of the books in the database have been published in the United States since 2002 and include illustrations. The physical collection books in the database is located at Bates College and can be checked out via interlibrary loan, according to HuffPost, and all book titles are available online for parents as well. Accessibility is one of the main goals of this program, according to its founders.

Aronson spoke with HuffPost about the project and the challenges associated with it. She explained that she didn't realize how difficult it would be just to find the books needed to be included:

These books are hard to find. There are many that have never seen the light of day for various reasons.

Unfortunately, the world of children's literature has remained white-washed throughout the years, as The Washington Post reported. A 2012 review of 3,600 children's books by the Cooperative Children's Book Center found that only 3 percent were about African-Americans, and even less featured Asian and Pacific Americans, Latinos, and American Indians. The scarceness of diverse books makes them harder to come across. But along with finding books that included minority characters, the database's creators were also conscious of how those books portrayed these people, Aronson said.

Quartz reported that of those minority-focused books, many of them are shallow. Hispanic kids' literature tends to focus on food, rather than people; African-American children's books tend to be biographical or show oppression, the outlet noted. Aronson told Quartz that this is an underlying issue that the database project took on:

These are important, but not rich, and can perpetuate stereotypes that Hispanic children are different or "other." The same is true about African American children; it’s a stereotype — that black children are in a struggle or somehow superheroes and ever resilient.

Literature has the power to shape reality. And by compiling this extensive list of books that are often hard to find, Diverse BookFinder is making powerful stories accessible to children (and parents) all across the United States.