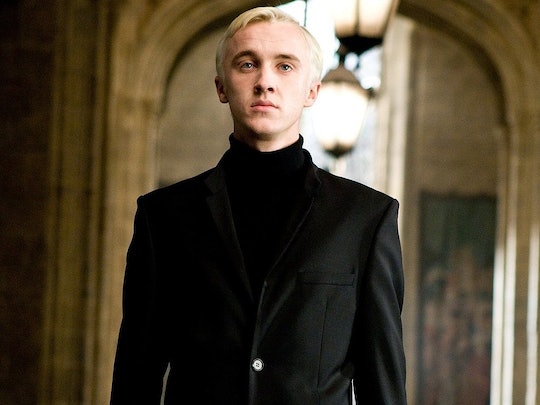 I'm not sure if there's another villain I hate as much as Draco Malfoy. Throughout the Harry Potter series, he was consistently shown to be a pompous, spoiled, racist, classist little prick with zero redeeming qualities. But what if he did have one? This deleted scene from Harry Potter and the Deathly Hallows Part 2 will make you look at Malfoy in a whole new light.

As you may or may not recall, Malfoy was a horrible person from his very first appearance in the series; his introduction began with him telling Harry not to hang out with Ron and Hermione because they were poor and Muggle-born, respectively. As the years went by, fans of the series learned to hate him more and more as he tormented the heroes, looked down on literally everyone, and sucked up to the dreaded Professor Snape.

Yes, I understand that it's not completely his fault that he's such jerk; he was raised by Lucius Malfoy, noted Death Eater, and Narcissa Malfoy, née Black, whose family I won't even get into. But fans never really saw any good in him at all, save for that time that he just didn't have it in him to kill Dumbledore. I'd argue that not murdering your principal doesn't automatically make you a great person. So what if he had done something great, like, say, helped Harry defeat Voldemort? That would have given his character a little more dimension.

This scene from Deathly Hallows Part 2, shown during a behind-the-scenes documentary, appears to have taken place shortly after the Most Awkward Hug Ever, between Voldemort and Malfoy. In the version of the movie fans have seen, Harry is able to finally defeat Voldemort using the Elder Wand because he disarmed Malfoy (who had it because he previously disarmed Dumbledore). But in this other, untold version, it appears that Malfoy gives Harry the wand, possibly because he's grateful to Harry for saving his life twice in the past hour or so, or possibly because scared shitless of Voldemort and has finally had it.

I know that Harry and Malfoy were never meant to be friends. And I wouldn't want them to be. They're just very different people who would never, in a million years, get along. But this other version of Malfoy, one that's only, like, 90 percent evil, really makes fans think. Would fans look at him differently now if this scene had been left in? Or would fans have raised hell because it's not canon? I guess we'll never know, but once my son sees Deathly Hallows Part 2, I'm definitely showing him this scene to get a young fan's take on it.