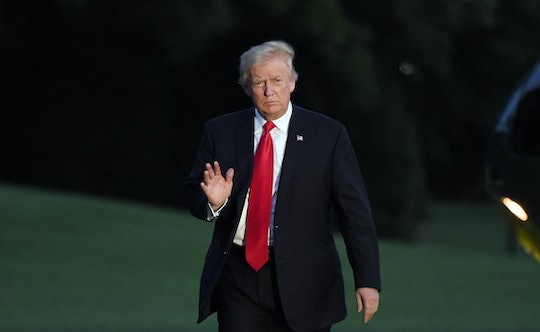 On Wednesday, one Democratic politician took the plunge: California Rep. Brad Sherman filed impeachment papers against President Donald Trump, claiming that the president obstructed justice — a felony offense — when he fired former FBI director James Comey. It's the first step in a process that would lead to the president's removal from the White House. But just how likely is it that Trump would actually be impeached?

By Sherman's own admission, impeachment is a long shot. In a statement, Sherman laid out two results that his impeachment efforts could possibly bring about. "First, I have slight hope it will inspire an ‘intervention’ in the White House," he said in a statement. "If Impeachment is real, if they actually see Articles, perhaps we will see incompetency replaced by care. Perhaps uncontrollable impulses will be controlled."

The second option, he said, was that the president would continue business as usual and Republicans would eventually join him in his quest to impeach Trump "many, many months from now."

Sherman alleged that Trump had committed obstruction of justice when he fired Comey in May. At the time, Comey was leading the FBI's investigation into Russian involvement in the 2016 elections. "It now seems likely that the President had something to hide," Sherman said in his statement.

However, for Sherman's article of impeachment to actually lead to Trump's removal from the White House, Sherman would need a large amount of support from Republicans in the House of Representatives. The article would need to receive a majority vote in order to move forward, and in a House currently controlled by Republicans, that seems highly unlikely.

Even if Sherman's article did receive a majority vote in the House of Representatives, it would then face other hurdles. A political trial would take place in the Senate, where a two-thirds majority would be needed in order to remove Trump from his office. According to Newsweek, the entire process could take years to be carried out, and it would need far more support in order to succeed. At the moment, only one other congressman — Texas Rep. Al Green — has thrown his support behind Sherman's article of impeachment.

Romper reached out to the White House for comment, but did not hear back immediately. However, according to the Hill, White House spokeswoman Sarah Huckabee Sanders told reporters off-camera on Wednesday, "I think that is utterly and completely ridiculous and a political game at its worst."

At the moment, it seems like Trump's impeachment is fairly unlikely, and in the meantime, most Democrats will want to focus their efforts on issues like Trumpcare instead. However, as Sherman said in his statement, filing an article of impeachment is simply "the first step" on a long road — one that he hopes will make the White House reconsider their current decisions.