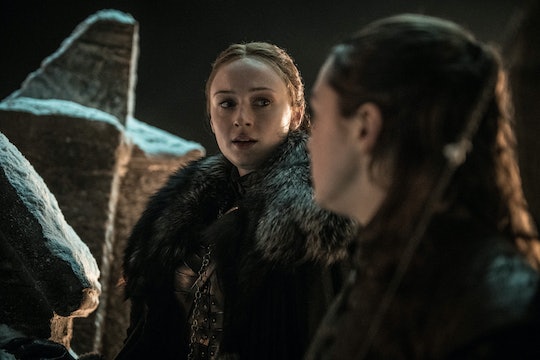 This 'Game Of Thrones' Theory May Predict The Stark Children's Fates

If you watch Game of Thrones, you know that certain plot points connect to each other in the most fascinating ways, which is why fans are obsessed with analyzing every aspect of the show. Now that the series is ending, fans are pondering the connection between the Starks and their wolves. Some people think that this dire wolf Game of Thrones theory may just predict the Starks' fate.

With only four episodes left in the series, fans are hanging on to every thread of hope to see their favorite characters survive. In Episode 2, titled “A Knight of Seven Kingdoms,” almost every relevant character this side of Winterfell was given screen time. Seeing Tyrion, Jaime, Brienne, Podrick, Sir Davos, and Tormund talk and sing in front of the hearth at Winterfell, many couldn't help but think that this might be the last time they would see some of these characters alive and well. But it’s the fate of the Starks that most fans are worried about, which is why this dire wolf theory is making a splash.

If you don’t remember, in the series premiere of Game of Thrones, Ned Stark and his sons came upon a litter of six direwolves whose mother had died. Upon realizing that the Stark sigil is a direwolf, and that the six pups perfectly represented his six children, Ned gave each child a pup to raise. As Season 8 begins, only four Stark children — Arya, Sansa, Bran and Jon — and two direwolves — Nymeria and Ghost — are left alive. After missing for almost an entire season, fans were thrilled to see Jon’s wolf, Ghost, make a comeback in Episode 2, and many couldn’t help but wonder if his reemergence had a deeper meaning.

Earlier this month, Redditor RidgeRomaSergey theorized that the name of each Stark dire wolf may signify the fate of their owner. “The wolves' names seem to correspond with where the characters are now,” wrote the Reddit user. “Jon is more or less a 'ghost' now, Sansa is Lady of Winterfell. Robb's wolf was called Grey Wind and he died at the hands of the Freys, who have grey dominating their house sigil... Can't quite place Rickon's Shaggydog, but for Arya, Nymeria was a warrior queen, and so far she has fulfilled the warrior bit — Bran and his, Summer — could hint at how he will end NK's (Night King) winter and usher spring & summer.”

Another Reddit user, mephis_baal, gave their own version of this theory, citing that the name of Bran’s direwolf, Summer, was significant because Bran was born in the summer, and would possibly die in the summer as well. The user theorized that Robb’s direwolf was named Grey Wind because his fate was similar to a “a blustering wind that brings rain and is gone soon thereafter.” The user also noted that Rickon’s Shaggy Dog represented “a story that goes nowhere,” similar to where Rickon’s story ended up.

It’s hard to predict whether this theory is true, but parts of it do make sense. With only a few weeks left until the end of Game of Thrones, fans should have answers to all their burning questions soon enough.