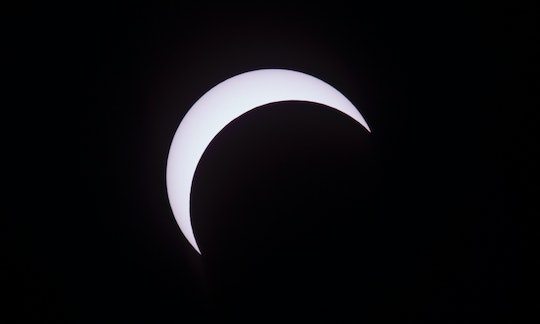 This Solar Eclipse Glasses DIY Will Help You In A Pinch

People all across the United States will turn their eyes to the sky for only a brief moment next Monday to watch the moon cover the sun during the total solar eclipse. But staring into the sun without proper protection is extremely dangerous, which is why it is so important to get your hands on solar eclipse viewing glasses. If you waited a little too long to purchase your glasses ahead of the big event (it's OK, it happens to all of us), this solar eclipse glasses DIY will save you from the sun's rays — and a trip to the store.

If you're anything like me and have a bad habit of arriving late to parties, then you probably just started preparing for the solar eclipse next Monday. If you plan on viewing the eclipse outside (and not on TV or from a live stream), then you only need one thing — solar eclipse glasses — to properly view it. However, a last minute rush to prepare for the eclipse has led to shortages across the nation and a major price increase on Amazon (a pack of five solar eclipse glasses on Amazon will cost you $40 — yikes).

If every store around you has run out, and those Amazon prices have you blacked out, there are ways to make your own solar eclipse viewers without having to spend money.

As NBC News affiliate King 5 reported, you can create your own solar eclipse viewer by making a pinhole camera, which projects the eclipse onto a surface, by way of a hole put into a box. Pinhole cameras can be made out of any box — from a cardboard Amazon box that you definitely have lying around, to that Cheerios box you've had in your pantry for the past week — duct tape, an empty can, and some white paper.

This video, produced by NASA, perfectly explains how to make a pinhole projector and how to properly use it to view the eclipse:

Or, if you prefer written instructions, this simple infographic on how to make a pinhole projector is very helpful.

If you don't have a box lying around, you can just use a piece of white card stock and some aluminum foil to project the eclipse onto another surface (without having to look directly at the eclipse altogether) using this tutorial from the NASA Jet Propulsion Laboratory from the California Institute of Technology. Once you have your pinhole projector made, you can stand with your back to the sun and orient your projector so you see the sun's reflection on the white paper. Then, simply let the sun (and moon) do their magic.

The science behind a pinhole projector isn't too difficult to understand. According to WIRED, the pinhole acts as a lens, allowing a small amount of light that is safe for viewing through the box and onto the paper (since the point of the projector is to avoid staring into the sun and hurting your eyes).

It is important to note that these pinhole projectors are not safe for staring directly into the sun (like solar eclipse glasses). But, they are a great alternative to solar eclipse glasses if you're in a pinch and don't want to miss out on all of the excitement on Monday.