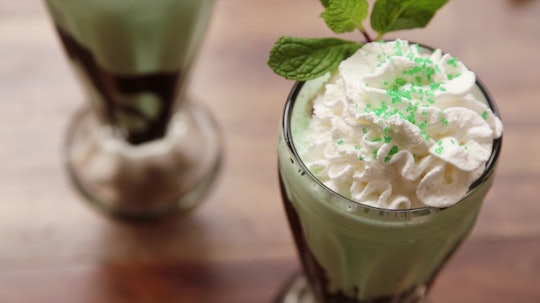 Here's How To Make A Shamrock Shake At Home, Because You Hate The Drive-Thru

I have to be honest (please don't be mad): I've never had a Shamrock Shake. Don't get me wrong — I understand the appeal of creamy vanilla ice scream splashed with mint and topped with whipped cream. It sounds delightful, I've just never taken the plunge. But I do know enough about the shake to realize that when the season hits, fans take it just as seriously as autumn's PSL and Reese's eggs at Easter. However, if you hit the drive-thru daily or simply have a 3 a.m. craving, then you'll want to make this DIY Shamrock Shake for yourself. Because can you ever really have enough of its minty goodness?

According to Debbie of One Little Project, the answer is an unequivocal no. That's why she invited Kelly from Typically Simple to share her homemade version of McDonald's popular green shake. To get started, you will need vanilla ice cream, milk, mint extract, green food coloring (this ingredient is for authenticity, but doesn't affect the taste if you don't have it on hand), whipped cream, green sprinkles, and optional chocolate chips and syrup.

The first four ingredients go in the blender, then you pour it into glasses and top with the whipped cream and sprinkles. Add chocolate chips and/or syrup if you are up for it.

Poke around the web and you will discover other copycat Shamrock Shake recipes. POPSUGAR created a DIY recipe and Edgy Veg even created a version with a vegan spin. The latter swaps ice cream and milk for dairy-free alternatives, and even includes a bit of leafy greens for a health boost.

Of course, I do understand that for some people there simply is no alternative to the Shamrock Shake that they look forward to each year from their beloved golden arches. At least, that's the sentiment I gathered as I read through tweets from Shamrock Shake aficionados around the country. @GrueningLuke tweeted: "MoreSeriously, is a large #Shamrockshake ever enough?" On the other hand, @belladrawson wrote that it was the Shamrock Shake that gave her incentive to continue on with her day when she tweeted "I convinced myself to get out of bed this morning because I remembered the #ShamrockShake is still out there and I need it."

And then, of course, there's Anna, who scrapped her plans for breaking a sweat once she heard the Shamrock Shake had made its annual appearance. She tweeted: "Holy shit. I just realized it’s SHAMROCK SHAKE MONTH. Was headed to the gym but looks like my plans just changed. #ShamrockShake#addict."

Other people took issue with the news that the Shamrock Shake will not be served at a single McDonald's location in Texas (yes, not one), a decision that was based, the company said, on the fact that "it's just not a product that we have a high demand for in Texas," according to GuideLive.com. Wichita, Kansas was also given the shaft, and people didn't take the news lightly.

Julia wrote: "I know several heartbroken families since the shake is no longer available in Wichita. I guess we’re not worthy!" Vanessa Aston made a case for Texans, tweeting: "@Reachout_mcd Hi, is there a reason why the state of Texas is not selling the shamrock shake? Other states seem to be missing it too? I look forward to this every year and sad to see it’s not available anywhere in the state!"

And then, there was Cyna, who proposed a full-on protest.

Which really put everything into perspective for me because I realized that the Shamrock Shake, while delicious and prettily green, is no laughing matter. And to those who don't have access to the shake, well, I dedicate this DIY article to you.