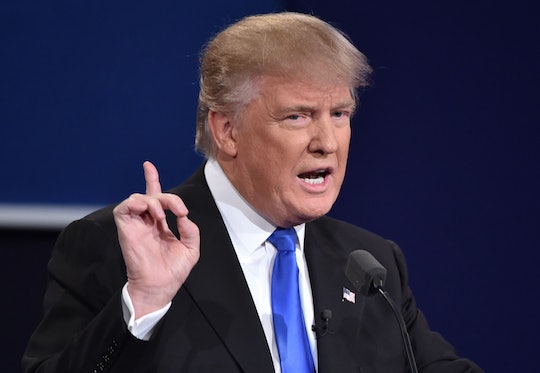 The first presidential debate at Hofstra University in New York got off to a surprisingly slow start, as the candidates debated such exciting topics as tax policy and trade deals. But things started heating up as soon as the topic of the North American Free Trade Agreement (NAFTA) came up. At this point, Republican presidential nominee Donald Trump insulted Hillary Clinton at the debate with an argument that was actually more a compliment than anything else.

The comment came after debate moderator Lester Holt asked Trump how he would "bring back the industries that have left this country for cheaper labor overseas." In response, Trump said that the country is in "deep trouble" because many of the other countries in the world are the "best ever" — the best ever at what, exactly, he didn't say, but the context suggests he meant at taking away American jobs and negotiating trade deals. Trump then said, "We have to renegotiate our trade deals."

Trump brought up the example of Mexico, claiming that when the United States sells goods to Mexico, there is a tax on the U.S., but when Mexico "sells into us," there is "no tax." At this point, Trump deflected the attention back to Clinton, saying, "She's been doing this for 30 years. And why hasn't she made the agreements better? The NAFTA agreement is defective."

Trump reiterated the criticism just minutes later, when he was talking about bringing manufacturing jobs back to the United States, particularly to Michigan and Ohio. "You've been doing this for 30 years. Why are you just thinking about these solutions right now? For 30 years, you've been doing it, and now you're just starting to think of solutions."

Amidst all of this vague talk about "creating jobs," Trump actually brought up an excellent point, which is that Clinton has 30 years of experience in the political realm. Clinton, of course, was quick to point to her years of service in the area of the global economy: "When I was Secretary of State, we actually increased American exports globally 30 percent. We increased them to China 50 percent," she said.

Trump stood unflinching in the face of these facts; rather than getting down to the nitty-gritty details of economic policy, he attacked NAFTA yet again, calling it "the worst trade deal ... signed anywhere..." And while there are certainly valid criticisms to be leveled against NAFTA, Trump's suggestions that it might be the worst deal ever was fact-checked by a business reporter at NPR, who said that NAFTA "had a relatively small impact on the economy," then cited a nonpartisan Congressional Research Service report that came to the same conclusion.

Now, if Trump had the nearly three decades of experience that his opponent boasts, he might actually know as much about trade policy as does she does. Experience is a good thing, but in this upside-down election season, it's not always seen as such.