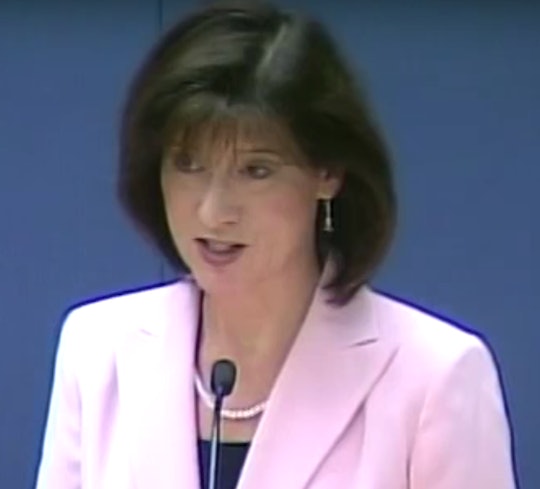 Donald Trump is really, truly going to be the Republican presidential nominee, and the business tycoon and former reality TV star is starting to think about the specifics of what he'd do in office as our next commander-in-chief. And because right now Republican senators are refusing to grant a hearing for President Obama's nominee for the currently vacant seat on the Supreme Court, Merrick Garland, claiming the next president should appoint the late Justice Antonin Scalia's successor, Trump is getting ready to do just that. On Wednesday, he released a list of 11 justices whom he'd consider to the Supreme Court if he's elected in November, and one name is seriously troubling.

Trump first floated the idea of possibly installing Judge Diane Sykes of Wisconsin, who serves judge of the U.S. Court of Appeals for the Seventh Circuit, on the Supreme Court during the Republican debate the day after Scalia's February death. At the time, he called the vigorously anti-gay detractor of women's rights a "fantastic" person. If her record is any indication, there's definitely nothing fantastic about her, and appointing her to the currently bifurcated court could be a real problem for civil rights advocates and fans of progress in the United States.

Sykes is possibly even more conservative than Alabama's Judge William H. Pryor, Jr., who is considered to be one of the most extreme picks on Trump's list of SCOTUS contenders, having referred to the legalization of abortion as "worst abomination in the history of constitutional law."

According to ThinkProgress, Skyes' "most revealing decision" came in 2006, when she wrote that anti-gay groups have the right to continue receiving government subsidies in Christian Legal Society v. Walker. It's a conclusion the Supreme Court ultimately rejected, but the rights of LGBT people — especially those who identify as transgender — are being challenged and restricted at the state level even in 2016, so to have a Supreme Justice with an anti-gay background is incredibly troubling.

Sykes, who assumed her current position in 2004 as an appointee of then-President George W. Bush, has also voted to uphold Wisconsin's voter ID law. Supporters of laws requiring voters to present some official form of identification claim they aim to prevent fraud, but these types of regulations are widely regarded as a means to disenfranchise minorities and the poor.

And that's not all. The Wisconsin judge wrote a 2013 majority opinion that concluded that for-profit corporations are not obligated to offer contraception on their insurance plans. Reminder: The Supreme Court later backed this decision in the controversial Hobby Lobby decision of 2014, which prioritized a business owner's religious opinions over women's health care needs.

The fact that Sykes has consistently adhered to strict conservative values throughout her career as a judge makes it no surprise that Trump included her on his list (they're all white, by the way). Her attacks on LGBT individuals, women, and the poor portend a frightening reality if Trump is elected president, even if he ends up appointing someone else on the list. Her one redeeming quality is that she used to be married to Charlie Sykes, a radio host who is an outspoken leader of the conservative #NeverTrump movement. Although Justice Sykes holds some tough-to-stomach views, it's possible she doesn't want anything to do with Trump, either.