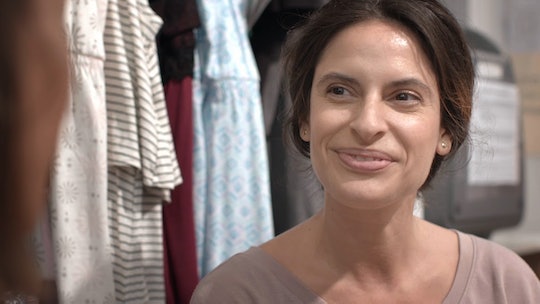 This Doula Will Help Care For Your Marriage, Too

“I used to watch a lot of births on YouTube. My sister and my husband found that a little weird. I found it fascinating,” doula Maria Luisa Dangond says over sandwiches at a cafe in Brooklyn. Dangond, who appears in Episode 3 of Romper’s Doula Diaries, ultimately found her way to doula work when her sister got pregnant. Dangond, who is originally from Colombia and now lives in New York City, was a health and wellness coach at the time, and her sister turned to her for advice on nutrition and other pregnancy concerns. She realized she already knew a lot about pregnancy from research she’d done just because she was interested. Becoming a doula felt like the natural next career move. “Becoming a doula was a thought that came with such force that I knew it was my calling.”

Postpartum doulas wear a lot of hats, but the common denominator is support.

Dangond received her doula training in December of 2016 through Doula Trainings International as both a birth and postpartum doula — she ultimately assisted in her sister's birth — but it’s the postpartum part of her work that really interests her, and that’s the work she does for clients Malika and Andrew (and their “new human,” Lennox) in Romper’s Doula Diaries. A postpartum doula provides evidence-based support for mothers and families post-birth. Due to the hormonal and life changes that can induce postpartum depression, care during this period, also known as the “fourth trimester,” is crucial.

Dangond and Malika met at a Brooklyn Meet the Doula event — basically doula speed dating — that Malika attended in search of a postpartum doula. Since she had had three myomectomies, surgeries to remove uterine fibroids, Malika and her doctor had decided that a planned c-section was the safest delivery method for her. That mean she anticipated needing extra help while she recovered. The date Malika chose for the birth was August 8th, which was, incidentally, the same day that Dangond met her husband. During the meetup, they also discovered that they share the same birthday. After meeting Malika, Dangond told Romper, “I hope she hires me, we connected so well.” She got the job.

“Postpartum doulas wear a lot of hats, but the common denominator is support,” Dangond says, and over the course of the episode, you see all of the forms that support takes.

In other cultures, extended family often surround a new mother and help her recover, but in frantic New York City, that post-birth community is often absent. A postpartum doula steps in to fill that void, helping the mom with both emotional and physical recovery from birth, as well as mother-baby bonding and basic infant care. Dangond has a Mental Health First Aid certificate, meaning she is trained to notice signs of mental health issues, namely postpartum depression and postpartum anxiety.

But the work goes further even than that. Unlike a doula present during a birth, a postpartum doula focuses on the entire family, not just the mother. Past their immediate connection, Dangond says Malika was drawn to her because she offered support for Andrew as well. “Malika asked about postpartum work, and I told her about cooking, organization, watching for signs of depression, and I also told her that I make sure the husband’s doing okay too. She was like, ‘You’re the only person who mentioned that,’” Dangond recalls.

A lot of moms also fear communication with their partners is not going well.

Over the course her time with any postpartum client, which can range from from five days or nights to 12 weeks, Dangond does everything from provide breastfeeding support (she is training to be a lactation consultant as well) to preparing food for the family to looking after the baby while the weary mother takes a nap. Her hours vary from family to family depending on their needs, and sometimes she will “do ‘an overnight,’ which means I’ll stay there so the mother can sleep. I feed the baby from breastmilk that the mom has pumped before or formula,” Dangond says. Overnights are not something every postpartum doula provides, but Dangond says she enjoys the work.

Another important part of Dangond’s role is that she helps couples navigate the transition to parenthood, and the stress it can put on relationships. “A lot of moms also fear communication with their partners is not going well,” she says. After Malika’s birth, Dangond noticed that tension was running high and so held a meeting of sorts in which both Malika and Andrew could share how they were doing. She also helped soothe things by reminding them that every couple goes through stress right after birth. Another day, Dangond stayed with their newborn son so they could venture out on a date.

Above all and perhaps most importantly, Dangond reminds new moms that yes, despite lack of sleep and breastfeeding and partner concerns, they are doing amazing.

Dangond and her husband have no children of their own (yet), but they travel and seek out other adventures, like driving upstate to catch an art exhibition and trying new restaurants in New York City. Dangond says she derives a lot of her joy from her work.

Beyond the inspiration of birth, being a voice for women during their simultaneously most vulnerable and most powerful moment has helped her find her own and given her strength and purpose beyond what she ever experienced as a health coach.“Being a postpartum doula, it just makes me more determined and more fierce. My voice is louder now.”