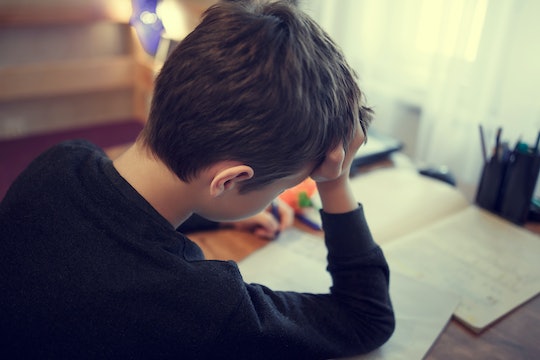 As students, it’s a decision we all wish came 20 years ago. One school in Montreal, Ecole Elizabeth Ballantyne, has reportedly adopted a new policy to do away with homework, part of a trend that started among schools a little over a year ago in an effort to make school a place to thrive rather than burn out. The elementary school's decision to ban homework has attracted both fans and critics. Supporters believe students are stressed out enough by school and need evenings to participate in other activities. Meanwhile, opponents of the no-homework policy argue that skills like time management and discipline are learned from time spent working outside the classroom, and that homework plays a vital role in developing young minds.

The principal at Ecole Elizabeth Ballantyne, Micheal Brown, made a decision that seemed to stem from the belief that students spend enough time with their noses in the books during the day. “We want students to be at home being with their families, being with their friends playing and being children,” Brown told CTV News.

"The best kind of homework is eating healthy, getting a good night's sleep and being ready for the next day of school," Brown told CBC News, adding that the reaction from parents and students has mostly been positive while some weren't completely on board with the new policy. He told the news outlet, "There have been parents who felt that it's coddling the kids. My answer to that is our standards haven't changed — they're still the same."

Recently, an elementary school in Florida adopted a similar policy, asking kids to read instead. And another school in Vermont also opted out of homework, encouraging students to use the extra time to get involved in after-school activities, spend time with their families, read home at home, and getting a good night's sleep.

That same thought was the motivation for a teacher that, anecdotally, started a no-homework trend in her own classroom when she sent a note home with her second-grade students last year, as The Washington Post reported in August 2016.

"Research has been unable to prove that homework improved student performance. Rather, I ask that you spend your evenings doing things that are proven to correlate with student success. Eat dinner as a family, read together, play outside, and get your child to bed early," the Texas teacher, Brandy Young, wrote to parents at the time, according to a Facebook post of the letter shared by a parent, which quickly went viral.

According to the National Education Association (NEA), homework standards have been under scrutiny for some time. The NEA recommends a guideline of no more than 10 minutes of homework per grade level. A 2015 study by The American Journal of Family Therapy found that elementary students were sometimes being assigned up to three times that amount, as reported by CNN.

As for older students, another study published in 2013 in the Journal of Experimental Education found that students at 10 high-performing high schools in upper middle-class communities were averaging about 3.1 hours of homework per night. Stanford News reported that students wrote of increased stress, sleep deprivation, and giving up social and extracurricular pursuits.

Twitter reactions to this elementary school's decision have been mixed. “This is so consistent with research around #homework in elementary schools. "Kudos to them! #relationshipbased #learning,” one Twitter user wrote.

Another Twitter user pointed out the health benefits. "LOVE it! Homework leaves very little time for kids to play outside, go to sports or other activities, participate in preparing healthy meals, spend time with their families and get enough sleep," she wrote. "I'm always telling my friends that research does not support homework!"

However, some weren't completely convinced that the decision would help kids in the future, as these Twitter users expressed.

It does seem as though everyone wants children to learn, there are just disagreements about the best ways to accomplish that goal, and perhaps not nearly enough understanding about the diverse lives of students outside of school.

Cory Bennett, now a professor of education, told Pacific Standard Magazine in October 2017 about an experiment he did when he taught eighth-grade math. By asking his students to write a 100-word essay on their life, he learned about problems at home, social pressures, and socioeconomic issues and it helped him understand why his students were failing his traditional homework assignments. He told his students, according to Pacific Standard Magazine, "Here is what we have to learn; do you have ideas about how to do it?" From there, Bennett told the publication that he incorporated their feedback into the assignments and the "results were extremely optimistic," eventually leading to projects that they'd take home.

It's clear that there isn't one perfect answer to this debate and with the pressures on students continuing to rise this issue surely isn't going away. It may take more studies, perhaps even more long-term results, before we see anything close to a consensus, but the good news is that it is being discussed at all. We all want to see our students learn, succeed, and ultimately, grow.

More Like This
Teacher Shot By 6-Year-Old Student Told School He Had A Gun, Was Told To "Wait"
Florida Teachers With “Unvetted” Classroom Books Could Face Felony Charges
13 Is "Too Early" For Kids To Be On Social Media, Surgeon General Cautions
Barbie Honors Aviator “Queen” Bessie Coleman In Their Inspiring Women Line
What Parents Are Talking About — Delivered Straight To Your Inbox