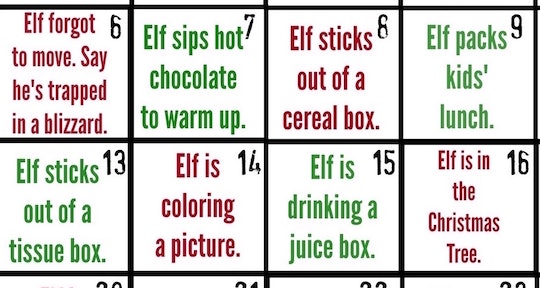 An Easy, Actually Doable Elf On The Shelf Calendar, Because *Ugh* You Just Can't

There are two things that grow all December long: my excitement for Christmas, and my admiration for the endlessly creative moms posting their genius Elf on the Shelf escapades on social media. Seriously, how is everyone so dang inventive with these things? If you aren't as clever when it comes to your family's North Pole visitor, don't worry. This Elf on the Shelf cheat sheet is a slacker parent's dream, and it's here to get you through December without losing any sleep over an Elf doll.

If you aren't familiar with the Elf on the Shelf phenomenon, or if this is your very first year participating, here's a quick rundown. The Elf on the Shelf is sent to your family's home to help Santa with his naughty and nice lists, and they're tasked with reporting back to Santa about your kid's behavior. Each Elf comes with a children's book, The Elf on the Shelf: A Christmas Tradition, that explains the story behind your Elf in detail. To summarize, the Elf heads back to the North Pole nightly to let Santa know how the day was, behavior-wise. "Each morning, the Scout Elf returns to its family and perches in a new spot, waiting for someone to spot them," according to the Elf on the Shelf website. "Children love to wake up and race around the house looking for their Scout Elf each morning."

This is where you, the parent, gets to have a little fun – or it's the part that you dread, depending on your imagination. Each morning, from December 1 to December 25, the Elf is up to something new... and coming up with 25 original scenarios requires a bit of ingenuity. Well, it did before Devon, also known as blogger Mama Cheaps, compiled this delightfully simple "Elf on the Shelf Calendar: Slacker Edition." Follow the calendar throughout the month of December, and you won't need to rely on your imagination (or lack thereof).

How simple is this? As Devon explained on Mama Cheaps, "Every year the interwebs come alive as parents young and old begin to frantically search for new and different Elf on the Shelf ideas for posing and hiding their elves. And every year this seemingly innocent tradition pits people on two distinct sides of the elf fence: parents who create nightly intricate, detailed scenes for their family elf vs. parents who never remember to move their elf." With this easy peasy calendar, you won't forget to move your Elf because her suggestions are so dang easy. And, if you do head to bed before moving your Elf, you can do it quickly in the morning because seriously, these won't take you more than a minute.

Of course, some days you may be feeling a bit more ambitious in your elfish endeavors, or maybe you're an overachiever each and every day. Mama Cheaps has you covered for that too with her "Elf on the Shelf: Overachiever Edition." Some of these are... well, truly made for overachievers. Props to you if you venture into this calendar! At the very least, you could use this version for inspiration.

We aren't all creative geniuses, and that's OK. Contrary to what Pinterest might have you believe, that's actually not a prerequisite for having children. Phew. With these Elf on the Shelf calendars and cheat sheets from Mama Cheaps, you can take back your December from this little Elf. Don't overthink it, mama!