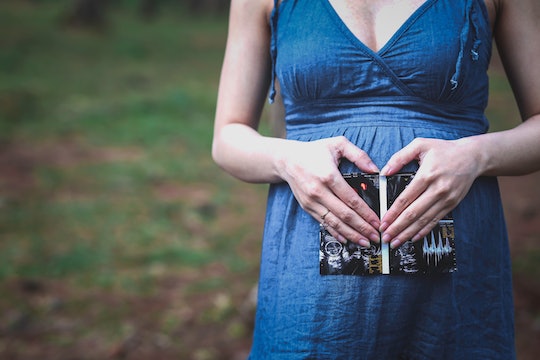 Science Says The Air We Breathe Is So Toxic, It Might Make Us Give Birth Early

For most women in the United States, pregnancy and child birth are a relatively-easy and complication-free event, and taking home a healthy, full-term baby is usually a given. But preterm labor is actually a common problem, and it's a big contributor to the national infant mortality rate. What's even more concerning though is that there's still no definitive way to prevent it. Doctors have identified some medical factors that can increase a women's risk of early labor, but researchers looking at at the effect of air pollution on pregnant mice found that one environmental factor could be linked to preterm birth, too. And unfortunately, it can be a hard one to completely avoid.

According to Science Daily, a New York University School of Medicine study published Thursday in Environmental Health Perspectives, found that exposure to air pollution early in pregnancy could increase a woman's risk for preterm delivery and a having a low birth weight baby. Specifically, the study looked at the effect of fine particulate air pollution called PM2.5, which is the type of pollution we inhale and don't usually see (think, car exhausts and power plant emissions). What they found was that when mice early in their pregnancies were exposed to levels of PM2.5 comparable to those found in highly-polluted urban environments, around 83 percent of them gave birth prematurely. But that's not all: early exposure to PM2.5 also resulted in an 11.4 percent decrease in birth weight in half of the litters born.

While it's not an issue any parent anticipates dealing with, preterm labor is a big deal: according to the National Institutes of Health, it's second only to birth defects as the leading cause of infant death in the United States, and it is also the leading cause of long-term disability related to the nervous system in children. Medical technology has come a long way when it comes to keeping premature babies alive — according to British prematurity charity Tommy's, babies born as early as 24 weeks now have about a 40 percent chance of survival, while those born at 29 weeks are 95 percent likely to make it. But the risks of preterm birth aren't limited to survival: according to the March of Dimes, premature birth can lead to long-term issues, like physical and developmental delays and disabilities, behavioral issues like anxiety or ADHD, vision and hearing problems, lung disease, and serious intestinal problems.

Given the impact of preterm birth, it's clear that being able to better prevent premature delivery is hugely important, and doctors have already highlighted a number of medical risk factors, including cervical abnormalities, pregnancies involving multiples, infections, placenta previa, and the use of IVF, according to the National Institutes of Health. But the findings of the NYU study adds to a growing body of research on the effects that pollution can also have on pregnant women and their babies.

Although it's long been known that air pollution could be linked to health issues like asthma in children and adults, its effect on developing fetuses was less clear. According to The Independent, a preliminary 2016 study in Occupational & Environmental Medicine suggested a link between air pollution and the risk of stillbirth, and earlier this year, according to The Guardian, researchers at the Stockholm Environment Institute (SEI), the London School of Hygiene and Tropical Medicine, and the University of Colorado, advanced the connection between air pollution and prematurity when they found that as many as "3.4 million premature births across 183 countries could be associated with fine particulate matter."

Now, the latest research from NYU is showing that air pollution in early pregnancy is what seems to be particularly concerning in terms of preterm labor. While there still might be more investigation needed — and while studies in mice can't always be directly extrapolated to humans — the growing body of research seems to be making a pretty good case for why reducing exposure to air pollution should be a priority.

As concerning as that evidence is though, it doesn't look like we should be too optimistic about the future of our air quality. In March, President Donald Trump signed an executive order to roll back environmental protections, according to The New York Times, and expressed his support for reviving the coal industry. And in June, according to CNN, he announced the United States would be withdrawing from the Paris accord on climate change, much to the dismay of foreign leaders (not to mention many Americans).

Those decisions weren't exactly welcome news to anyone concerned about the environment, and now, it's also likely to be particularly concerning for anyone currently pregnant, or who may be planning on becoming pregnant in coming years. But while wide-scale improvements in air pollution may not be on the horizon, researchers did offer a suggestion for any women early in their pregnancies: while there's no guarantee, it's not a bad idea to avoid areas of heavy air pollution as much as possible, or to consider using an air purifier.