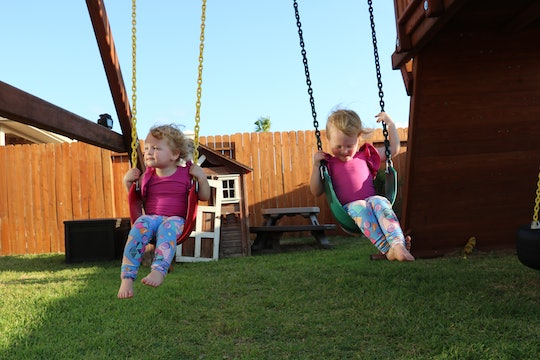 The Busby quintuplets are growing more and more every day on TLC's OutDaughtered, but with five three-year-olds running around it can be hard to keep all the kids on the same page. This exclusive clip from OutDaughtered celebrates a milestone for two of the girls — but also shows how worried their dad is that all of the quints might not be moving along at the same pace. Some of the girls just need a little more time, which is totally natural, though it's understandable that a parent might stress about it anyway.

The clip opens with the quints having a lesson with two of their preschool teachers. The women quiz the girls on their numbers and letters while taking note of who's shouting out what, which is no simple task when five toddlers are trying to speak simultaneously. Some of the girls are quick to identify the number one and letter S, but they don't stop there. These kids are going for extra credit. Parker and Riley prove to be the most eager to get their answers out, also pointing out the colors and sounds that they know. One of the girls even makes an appropriate hissing noise to indicate that she knows what an "S" sounds like and that "snake" starts with that letter. Randi the preschool owner is impressed.

Randi is so impressed that she calls in parents Adam and Danielle for a conference about the girls' progress and development. Adam appears slightly nervous about the meeting and explains why in a confessional segment: you never know if chats like this are going to be good news or bad news. This proves to be entirely good news, however. Though the quints have been excelling in the toddler room at the preschool, Randi feels that Parker and Riley are ready to move up a grade. She does not specify what grade they will be moving to and I do not recall there being grades in preschool, so one can only assume they are going from the toddler room to some kind of Toddler Plus room. They're still too young for first grade and Randi makes it seem like they'll be staying in the same building, so it's somewhat unclear what the levels are at this establishment.

But while Randi could be less ambiguous on the topic of preschool grades, she is very free with praise for the Busby girls. In her opinion, Parker and Riley have become real leaders in their class. Though they can be bossy, that's actually a good thing because it's a sign that they're ready to take the next step.

This makes total sense to Danielle. In a confessional, she says that Riley is always the boss at home, while Parker is usually the first to figure things out. She looks delighted to hear about how well her daughters are doing, though it doesn't seem like Adam's nerves have abated during the meeting. He wants to know how moving grades will affect the other three girls, Ava, Olivia, and Hazel. Randi thinks it would be a positive for them because it would give them a chance to "be leaders" and come into their own.

Ava, Olivia, and Hazel aren't behind in school and all the girls are very bright, but they each have specific needs that have to be met in different ways. Danielle embraces that idea with excitement; as long as the girls are ready, she wants to see them become individuals, growing and learning at their own particular paces. But Adam is still worried.

After leaving the school, the parents have a tête-à-tête in which Adam shares his fears: he's not sure about separating the kids since they've always been together. He doesn't want anyone to be left behind. The clip ends before Adam and Danielle can come to a mutual understanding about what to do, but with more discussion hopefully they'll figure it out. Their kids are doing well, and that's the most important part.