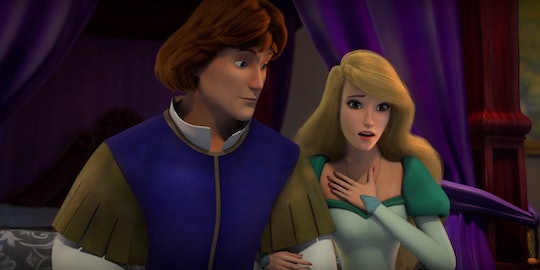 The Swan Princess is a childhood favorite based on a book that so many adults today still remember and can appreciate. Now, a new movie in the franchise, The Swan Princess: Kingdom of Music, will be released on DVD on Aug. 6 and the kid in you is probably screaming in anticipation. This exclusive clip from the new Swan Princess movie will help prepare you for the next chapter in the story.

The original story followed Princess Odette who was cursed by an evil sorcerer to become a swan and remain captive at an enchanted lake. She befriended some other talking animals along the way, but eventually it was a declaration of everlasting love from Prince Derek that set her free from the curse. It's not the most unique movie trope when it comes to fairy tales, but The Swan Princess is still remembered as a staple of many adults' childhoods.

In the clip from newest installment in the movie series, Odette and Derek try to help Princess Mei Li lift a curse from her own potential love, Chen, who turns into a dragon every night at sundown. Along the way, Odette and Derek relive their own history and it's a great callback to the movie that started it all.

Although this might seem like the first direct to DVD and streaming sequel that The Swan Princess has had since its original 1994 release, there were actually seven other movies that came before it. Other movies in the franchise continued to follow Odette and Derek on their adventures after getting married and they put a spin on the whole "happily ever after" notion. While Odette and Derek have stayed together through the movies, they have had to deal with wizards and the Forbidden Arts more than once. They also adopted a daughter, now Princess Alise, so they have definitely come a long way.

In The Swan princess: Kingdom of Music, Odette brings together different princes and princesses to hold a music competition in honor of Alise's birthday. Prince Li's arrival causes a rift between Alise and her boyfriend Lucas and the two eventually fight for her heart. In the meantime, Odette and Derek are working on helping Mei Li, who stowed away on Li's ship. It might be the first movie that some fans of the original have seen since watching The Swan Princess as kids, but something tells me you don't necessarily have to watch all of the other movies to understand or appreciate the newest story.

The Swan Princess: Kingdom of Music will be released on DVD and digital on Aug. 6, and while you can re-watch your VHS or DVD of the original movie that started it all, you might want to hold off on that. The Swan Princess will be released on Blu-ray and in 4K HDR on digital on Oct. 29 for the first time ever in honor of its 25th anniversary. For a movie that started out with simpler animation and eventually graduated to high definition computer animation down the line, that's a pretty big deal.

Like all of the other movies before it, The Swan Princess: Kingdom of Music is rated G, but there are some tongue-in-cheek jokes in the clip from the new movie. Like Odette and Derek playfully arguing over how he lifted the curse from her as he points out that she was technically dead in that moment so he probably remembers it better than she does. Whether you have introduced your own kids to the original or not, this new installment definitely fits in with the franchise and you probably won't want to miss it.