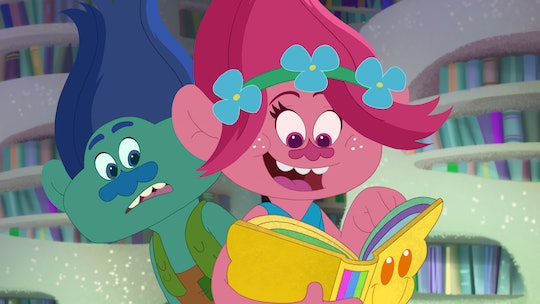 Kids Will Love This Exclusive Clip From Netflix's Series 'Trolls: The Beat Goes On'

NBC may have given Trolls a fun holiday special treatment, but Netflix is gearing up to take things one step further by spinning a full-blown TV series off the beloved film. Premiering on Jan. 19, the show, titled Trolls: The Beat Goes On, will continue the adventures of Poppy and Branch, complete with the music that endeared so many fans in the first place. And this exclusive clip from Dreamworks' Trolls: The Beat Goes On gives viewers a hint of what to expect from the upcoming show. (Spoiler alert: it's going to be your kid's next new obsession!)

In the clip, protagonists Poppy and Branch perform a new song called "The Other Side of the Storm." Some audience members might notice that the characters sound a little different than their movie counterparts; that's because the lead roles have been taken over by Skylar Astin and Amanda Leighton. (In the film, Branch and Poppy were voiced by Justin Timberlake and Anna Kendrick, respectively.) However, Trolls is keeping the Pitch Perfect connection even with the casting shake-up; the original songs have also been written and produced by Pitch Perfect 3's Alana Da Fonseca.

The new song contrasts Poppy and Branch's different outlooks as they each try to convince the other to see things their way. They appear to be on a mission to find something called the "triple rainbow-maker" but Branch is characteristically less enthused than Poppy.

In fact, in true Branch form, he worries that the whole thing is downright dangerous. Branch tries to explain to her that their journey could end up with them risking their lives, and it isn't worth undertaking despite the fact that it could provide some protection to the citizens of Troll Village. When Poppy agrees but still runs off to take on the mission anyway, Branch attempts to convince her in a different way. "If you won't listen to what I'm saying," he remarks, while his voice takes on a melodic quality, "will you listen to what I'm singing?"

Though Poppy is impressed by his vocal stylings when Branch imparts his plea to stay home and remain safe, she's undeterred. The song really kicks into gear as they embark on their trip, with each of them viewing what happens from totally different perspectives. Poppy is delighted by the adventure and constantly sees the bright side, peppering the song with optimistic details. Branch is not quite as happy-go-lucky.

Poppy is certain that as long as they work together, they'll come out of things OK; per the title of the song, they'll make it to the other side of the storm. So when they end up in the intestines of a Venus Fly Trap, get dropped over the edge of a waterfall, navigate gigantic spiders, or cross a rickety path over what seems to be lava, Poppy can always see the light in the darkness. Branch may not understand how she can gloss over all the obvious danger, but Poppy also doesn't get why he can't be a little more positive.

Despite Branch's anxiety throughout their lengthy travels (which are cut into a montage over the course of the song), in the end they do make it to their goal unscathed. The new clip seems to indicate that the show will continue Poppy and Branch's teamwork from the movie, with her adventurous nature and his caution allowing them both to make the best of any given situation.

Even though the animation may look different and the voices aren't the same, it appears as though Trolls: The Beat Goes On is making an effort to capture the tone of the film that inspired it in the first place. Hopefully those that enjoyed Trolls the movie will find something equally appealing in the Netflix series. And if this clip is any indication, it will be something that your entire family will love.