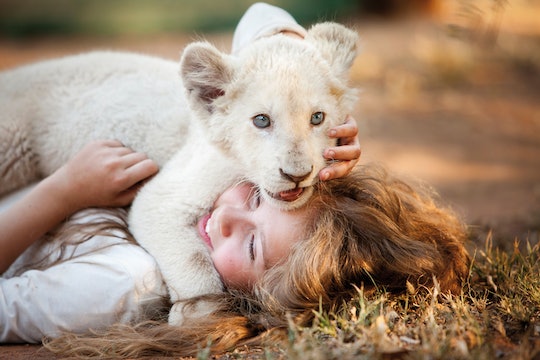 When it comes to movies that are just as enjoyable for parents as they are for kids, a really great find isn't always easy to come by. However, a new animal adventure flick might just change that. And this exclusive clip of Mia and the White Lion will make you so excited for its upcoming release later this month.

Out in theaters officially on April 12, Mia and the White Lion is the story of a young girl who moves from London to South Africa with her family in pursuit of becoming preservationists for the animals there. However, when Mia and Charlie, a white lion cub, forge a unique connection, Mia finds herself in a conundrum. Charlie is considered a threat not only to her and her brother, but the rest of the animals, too. So begins her journey to find him a home — somewhere he'll truly be safe.

In this exclusive clip of the movie shared with Romper, Mia tries to break open the fence to reach her family's backyard. With the help of an elephant, she's successful in finding Charlie after he's missing for a while. Shortly afterwards, a farm worker and friend of Mia's family finds her and her brother with Charlie, and commands them to go back to the farmhouse.

Assuming that Charlie is dangerous, the farm worker tells her to stay away from the lion, who is halfway grown at this point. However, Mia's brother points out that Charlie isn't trying to eat the other animals, rather, he was missing because he was actually saving a water mongoose. Of course, the adults aren't hearing any of it, and the clip concludes with the group separating.

The film seems extra special because of the way it was filmed, an aspect that parents can surely appreciate.

In a typical film involving live animals, a number of different animals at different ages would be cast to be used in the film. However, Mia and the White Lion — rated PG — is a bit different, because the project was actually filmed in real-time, over the course of three years, the Georgia Straight reported. This means that the kids and the animals actually got to bond and grow up together, exactly as you see playing out in the movie.

"The idea of the film is really to show you can have a real relationship with such beautiful cats," director Gilles de Maistre told the Vancouver Sun in an interview. "We did that in reality. So the lion was from the age of newborn cub to three years old. They saw each other every day. Daniah, the actress, and the lion they created a relationship." He also told the publication his inspiration for the film came from a real life situation he witnessed.

"I filmed a kid in South Africa who was in the same situation as Mia. He was living in a farm, breading lions, and I didn’t know about canned hunting and things like that and the people from the farm told me, ‘yeah we are here for conservation. We are going release the lions to nature,’” de Maistre told the Vancouver Sun. “The kid was so fond of the animals, especially of the lions. He had created a relationship with the cats. I thought fantastic. When I left the farm people told me it was bullsh*t. It was for tourists. This farm was breeding lions for hunting. I discovered that and the story of Mia came from that.”

Needless to say, this family film looks like there's something in store for everyone. Mia and the White Lion will premiere in theaters in the U.S. on April 12.