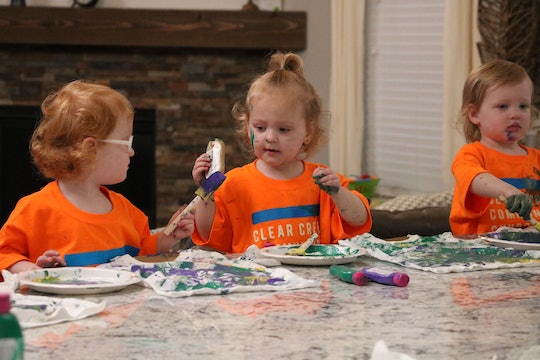 Potty Training Proves To Be A Problem On 'OutDaughtered'

Handling any milestone with your kid can be an uphill battle, but contending with five toddlers simultaneously has its own set of difficulties. Adam and Danielle Busby demonstrate that every week on OutDaughtered as they raise their quintuplets Ava, Olivia, Riley, Hazel, and Parker, as well as older daughter Blayke. And in this exclusive OutDaughtered clip, fans can see the Busbys attempt to handle a brand new challenge — with a little help from their friends.

OutDaughtered airs every Tuesday on TLC. In the fourth episode of Season 3, the Busbys give potty training another try, though it doesn't quite go according to plan. Meanwhile, Adam and Danielle accompany Blayke to a gymnastics lesson to spend more one-on-one time with her, which was something Blayke expressed a desire for in previous episodes. These two storylines converge in this exclusive clip. The Busbys are in need of a babysitter while they're out with Blayke, and their chosen volunteers quickly find themselves a little overwhelmed.

The clip opens with Danielle's sister Crystal and her husband Dale arriving at the Busby home and checking in with the quints. They'll be the ones keeping an eye on the girls for a few hours, but they immediately notice a few things are amiss.

First, Parker isn't dressed. Second, the room smells...somewhat questionable. Or, in Crystal's words: "God, it smells like poop in here." Dale followed up her pronouncement with a none-too-subtle gag. As they settle in with the kids, Adam arrives with apologies for the lack of welcome and an explanation for the distinct smell permeating the room.

According to Adam, Danielle is downstairs cleaning sheets because someone had an accident in a crib. Not their crib, however. Parker managed to get poo on Riley's and Hazel's cribs; her own remained spotless. Crystal declares that "nasty" while Dale proudly offers, "That's my girl."

Adam and Danielle are running late to gymnastics because of what happened with the cribs. "Anything those girls do has an impact on Blayke," Adam says in a confessional segment. "I mean, they made a mess and so now we're running behind. So as tricky as it was with the schedule, I'm really glad that we're doing this gymnastics thing."

Blayke appears to be in good spirits about the lateness, though, and does a little tuck-and-roll trick on the rug with Dale's help while waiting to get going. Then Danielle pops in for some last minute instructions: this potty training thing is getting serious, which means that every hour on the hour, someone has to go to the potty. If they perform the designated task (dubbed "tee-tee") then they receive candy. If they announce that they must perform one action ("tee-tee," again) but actually engage in another ("pee-pee") then they get to ring an old timey butler bell straight out of Downton Abbey.

Dale wonders if Danielle will be writing all of this out, because it seems like a lot of rules. Danielle simplifies things: "If it's pee, it's one. If it's poo, it's two." That is the general rule, but in this instance does it mean two rings of the bell? Two nibbles of candy? Tune in to find out, I suppose.

Adam and Danielle exit to a cacophony of shrieking while Crystal calls the kids over to the rug. In a confessional, she sighs that she's not sure what they're going to do about this potty training situation; Dale adds that it's one thing when you're potty-training one kid at a time, but five? That's a tall order. Luckily for Crystal and Dale, they only have to figure it out for a few hours.