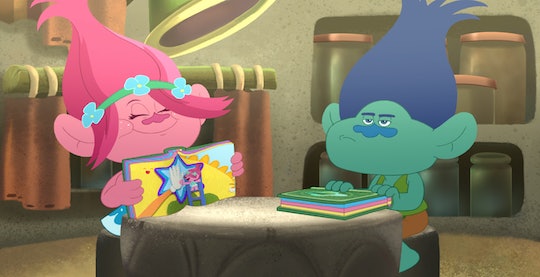 This Exclusive Clip Of 'Trolls: The Beat Goes On' Season 2 Introduces A Fun New Song — VIDEO

On March 9, the second season of the Netflix original series Trolls: The Beat Goes On! will make its debut. The show continues the story started in the feature-length animated film Trolls, taking protagonists Branch and Poppy on all new adventures. This exclusive clip from Dreamworks' Trolls: The Beat Goes On! Season 2 focuses specifically on the ever-positive Poppy as she introduces everyone to a beloved troll holiday that kids will immediately love.

The clip opens with Poppy waking up, ready to start the day with a song (and a lot more excitement than most people feel in the morning). But there's a good reason for Poppy to be so thrilled about bounding out bed: it's one of her favorite holidays. As twittering birds help her brush her hair and get ready, Poppy sings about "Prank Day," which is full of fun and games, not to mention a few well-intended tricks.

Voiced by Amanda Leighton, Poppy takes viewers through a musical tour of the village as its various inhabitants embrace Prank Day to the fullest. She guides the audience through the highlights of the day, which feature such typical cartoony jokes as pies to the face and fake boutonnieres that spray water everywhere. But it's all in good humor, as Poppy sings that it's "a day for everyone to laugh and sing and play."

Though Poppy is the orchestrator of many of the pranks in the song, by the end she has become the recipient of a bucketful of pink frosting to the head. And as delighted as Prank Day makes her, she doesn't seem too thrilled about getting that frosting out of her hair; perhaps the bluebirds from earlier can be of assistance again.

Everyone in the village appears to be totally into the lighthearted tomfoolery, but there is one key character missing from the celebration. The generally pessimistic Branch doesn't show up once in the minute-long song, and fans are sure to be curious how he feels about all these shenanigans. Though one might anticipate his personality not meshing well with a holiday like this, some might recall that it's actually his favorite, too.

In the latter half of the Season 1 episode "The Giver/Bellow Bug Day," Poppy remarked that all the trolls in town seemed to love the titular Bellow Bug Day the most out of all the troll holidays. However, Branch was quick to correct her that his personal favorite was actually Prank Day. Instead of disagreeing or butting heads, the two might find themselves bonding over a joint love of the trollish version of April Fools' Day.

Then again, in "Bellow Bug Day" Branch made it clear that he had plans to prank Poppy first and she seemed more than a little nervous at the prospect. Perhaps he's the one who sent that pink frosting launching in the first place. Maybe, if his promised prank goes too far, that could end up being the conflict of the episode. It definitely seems like Poppy's feelings about Prank Day might be a little more mixed than her initial, joyful song might have led one to believe.

Viewers will have to tune in to find out for sure. Whatever trouble arises between Poppy and Branch (if any does) will likely be resolved by the end of the episode, with plenty of fun moments happening along the way. Kids might even pick up an idea or two for harmless April Fools' pranks — though hopefully they'll stick to innocent ones like the fake spider one troll puts on her friend's shoulder. Nobody needs a real life version of the gigantic spider Poppy shows up with, and pies to the face belong firmly in the realm of cartoons.

To learn how Prank Day plays out, be sure to head on over to Netflix on Friday, March 9 when all new episodes will be available for streaming!

More Like This
'Workin’ Moms' Season 7 Is Reportedly In The Works! Here’s Everything We Know
'Squid Game' Is Coming Back For Season 2 On Netflix: Here’s What Parents Need To Know
Exclusive: Three Siblings With Super Powers Protect National Parks In Spirit Rangers
Kid First Responders Rescue Puppies In Disney’s Cute New Series