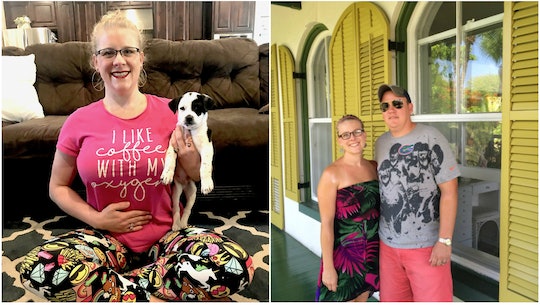 I Healed My Post-Baby "Belly Gap" With This Exercise, & I'm Telling Everyone

There is nothing sexy about my postpartum belly. No matter how many times my husband tells me he loves my new tummy because of "what it created" I will never accept this stretched, scarred and flabby aftermath of childbirth as "beautiful." What I didn't know, of course, was that my post-baby body wasn't just run-of-the-mill "it took nine months to grow, so it'll take nine months to go back"-type atrophy. In fact, I had an undiagnosed diastasis recti — requiring specific exercises to help heal.

I once went to the gym with a well-meaning friend who said, "If you work hard enough you'll get your pre-baby body back. You just have to want it bad enough." What I wanted bad enough at that moment was to cut a bitch. You can't wish away stretch marks and extra skin. This chick was confusing hard work with reconstructive surgery, and I truthfully didn't have the time or energy to explain that to Flat Abs Felicia.

My doctor told me I'd split my abs clean open with this last pregnancy, and my guts were starting to make a run for it out of my belly button.

It truthfully took several years before I could accept my new shape. But part of that acceptance came from the fact that I really didn't want to fix it that bad. My body is only a part of who I am, and it's not even the best part. My husband still wants to bang it out all the time, and I'd chosen journalism over modeling years before I had kids. So I've learned to focus on what I do like about myself.

About a year ago, I gave birth for the third time, and my midsection was still really squishy. Only this time I could feel a bit of extra squish around my belly button. My pregnancy body type could be described as "a capital letter B." I have giant boobs and I carry babies straight out in front of me. My doctor told me I'd split my abs clean open with this last pregnancy, and my guts were starting to make a run for it out of my belly button. I also had the classic and ever-so-sexy W shaped saggy belly that comes with a condition called diastasis recti.

I assumed that was just the way my deflated balloon belly had fallen when the baby plopped out. But the "W" often indicates that rather than a six pack, I'd developed two separate three packs, with a cavern of sorrow in the middle.

That well-meaning friend at the gym who urged me to do crunches and bicycles was just leading me down the path of the damned. Traditional ab exercises only serve to widen the gap.

My doc had me lie down on my back with my knees bent, and she put three fingers above my belly button. As I lifted my head off of the table she could feel that I had about a two to three finger gap in between my abs. She said my rectus abdominal muscles were shot. After humoring my rectus?-damn-near-killed-us! joke she explained his gap was also the reason I'd been having incredible back pain when doing simple tasks like folding laundry. My solution was to just quit doing laundry. But my doctor recommended something else: exercise.

My initial reaction was that of a demon sprinkled with Holy Water. After I stopped hissing, she told me I really only needed to give her 10 minutes each day. And I wasn't to step foot into an abs class.

That well-meaning friend at the gym who urged me to do crunches and bicycles was just leading me down the path of the damned. Traditional ab exercises only serve to widen the gap. I hope her kid stops sleeping through the night.

My doctor gave me a link to an NPR article describing the 10-minute breathing technique that was supposed to sew me back up from the inside, so I vowed to try it for one month.

The exercise is basically mindful breathing. You sit criss-cross applesauce on the floor with your hand on your belly, and you take a big breath in letting your gut fully expand. I assume this is the part of the exercise that proves things could be worse. Because it forced me to feel what happened when inflating my deflated balloon. As you exhale, you suck your gut all the way back as far as you can. I particularly like the way mine curled back, roll by roll.

Then you hold that position taking tiny breaths, and with each exhale you push your belly farther and farther toward your backbone. You can even do this exercise lying in the fetal position, which just so happens to be my go-to Netflix and Chill posture. I love getting fit while binge-watching trash TV, so this was definitely for me.

Because I'd given up on having an adorable midsection, I'd walked around with terrible posture. But this exercise forced me to stretch up tall.

I tried to make time each day to push my gut into my spine. I did it driving down the road. I did it in bed. I did it in the mirror in the morning while getting ready. And I did it while waiting for my food at a restaurant. I think people thought I was just gassy a lot because I'd do it while trying to hold a conversation, and I'm sure my face looked like I was working on a pretty heavy fart.

I thought I was liberating myself with my who-gives-a-shit mentality. But I was really at war with a body I felt had betrayed me.

I wasn't sure it was making any difference in my gap, but all that mindfulness on my midsection did have its advantages. Because I'd given up on having an adorable midsection, I'd walked around with terrible posture. But this exercise forced me to stretch up tall.

I also started thinking about what I put in my body. I thought I was liberating myself with my who-gives-a-shit mentality. But I was really at war with a body I felt had betrayed me. Once I dedicated 10 mindful minutes to sucking in my gut, I decided it would be harder to suck in if it was full of pizza. And although I didn't go on a full-blown diet, I did start paying attention to the proportion of good and bad things I was putting in my mouth.

About two weeks in, I could already notice a difference in the way my pants fit. I found myself more mindful about walking tall, and my back wasn't killing me anymore. I'd have to find a new way to get out of laundry duty.

To my great surprise and delight, the gap was only one to two fingers wide.

I continued the exercises through the month, and on the last day I laid down again to test the gap. To my great surprise and delight, my innards had retreated back behind my belly button, and the gap was only one to two fingers wide.

I'll never have a completely flat belly, and I'll always look like I've been mauled by a deranged badger. But I think these 10 minutes a day have repaired more than my gap. I think they helped heal the relationship I had with my own body. And that is something I didn't even know that I wanted.

More Like This
Does Pumped Breast Milk Have Antibodies? Experts Weigh In
Why Does My Baby Cough While Breastfeeding? Experts Explain
9 Reasons Why Some Women Can't Breastfeed
Sex And Mom Guilt: When I Date Someone New, Am I Cheating On My Kids?