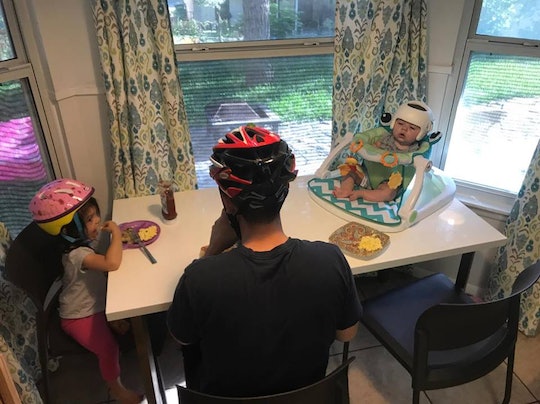 Feel-good stories really are like the bread and butter of the internet, aren't they? With all the bad news out there, it's refreshing to hear heartwarming tales — such as people with different backgrounds coming together, animals being saved from harsh conditions, and more. And now, one adorable Texas family (I'm biased) is about to win over all of America with their camaraderie surrounding their youngest son's latest accessory, in what is definitely one of the best feel-good stories of the week. Because seriously, what this family did after their baby had to wear a helmet will end you, in the absolute best way.

Shayna and Gary Gutierrez from San Antonio, Texas (Shayna is my cousin, full disclosure) got a bit of a surprise when they found out their 4-month-old son, Jonas, had been diagnosed with plagiocephaly — a severe type of flat head syndrome — and subsequently had to wear a helmet. But, they weren't going to let Jonas' new headgear deter any family fun or photo opportunities.

So when the Gutierrez's oldest daughter, 3-year-old Camila, decided to wear a helmet alongside her baby brother, the family saw that there were still plenty of ways they could all support baby Jonas too. In a now-viral Facebook post showing the family all wearing their own bike helmets at the dinner table with baby Jonas, the Gutierrezes showed what it truly meant to be a family, in the sweetest way possible.

"Solidarity in the Gutierrez home," Shayna captioned the above photo, which has since received an overwhelming response. Speaking to Romper, Shayna says the idea of everyone wearing helmets in solidarity with Jonas was her daughter's idea. "His 3 year old sister Camila was very excited when she saw it and I told her it was his helmet," she says. "She immediately wanted [to wear] her helmet and [for us to wear] all of our bike helmets."

The condition with which Jonas was diagnosed, plagiocephaly, is fairly common in the United States, according to the American Academy of Pediatrics. The AAP's latest study estimates that about 46 percent of babies have some form of the disorder. Plagiocephaly can develop in many ways, including while the infant is still in the womb, although there are great treatment options out there to fix it.

In Jonas' case, Shayna is refreshingly honest and upfront, which should come as a comfort to any parents out there struggling with the same situation:

He was born with a really big head, like the 99th percentile. He also was a great sleeper, and so as a mom of two I was like, "Awesome, he is such a good baby." And so I would feed him and then lay him back down as I healed from delivery and tended to my then 2-year-old.

So, he developed that flat spot and because he slept so good it just got worse — all moms know you don't mess with a good sleeping baby. By 4 months, our pediatrician sent us to get it checked and it turned out to be a severe case and had started actually pushing his head out to the sides. It was even affecting his face shape and could [have] distorted his features.

Parenting really is all about rolling with the punches, isn't it? The Gutierrezes prove that to be true with their positively inspiring way of helping little Jonas. And as for the response their story has gotten, Shayna says it has all come as a bit of a shock:

We are glad that people find it so sweet and I love that Camila can be exposed to something valuable like inclusion for those who are "different" — but the truth is we were just being our normal selves on a normal Saturday morning at home.

Shayna also says that little Jonas is adjusting to his helmet well, and that her biggest struggle has been dealing with some of the unexpected side effects. "We are super excited about the progress and changes that will be made to his head and face," she says, adding, "I will say it is hard to keep clean and stinks pretty bad from his sweaty head in the awful south Texas heat."

Clearly, little Jonas is in great hands. Not only does he rock his helmet like a pro, but his family is doing a pretty good job at making him feel included, even this early on in his life. And hey, having that added level of protection can't be a bad thing, right?

"Let's be honest, having two young kids can be tough, so helmets are probably a good idea anyway," Shayna adds jokingly. "Now I feel a little less anxious if Camila throws her toys and hits Jonas or if he takes a dreaded tumble off the couch... just kidding ...kinda."

So keep on keepin' on, baby Jonas, and keep on rocking those helmets, Gutierrez clan! You all look fantastic.