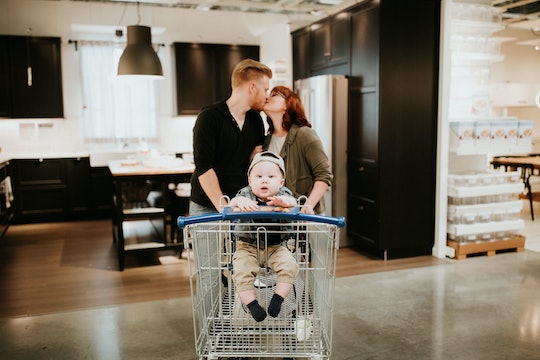 This Family Did Their Portraits At IKEA & OMG

Have you ever had to do a family photoshoot? I have, and they can definitely get interesting, to say the least. My family has one where we are all in black shirts and blue jeans, which definitely fit our style, but wasn't exactly the fanciest look we could have gone for. It can be hard to come up with something original and not totally cringe-worthy for family portrait photoshoots — something that expresses something about your family that also won't be a complete embarrassment to look back on years later. Well, one family did their portraits at IKEA, which honestly seems completely brilliant to me.

Choosing to do a family photoshoot at IKEA is such a fun idea, and one that perfectly captured this family's silly side. Plus, it's not like IKEA is going anywhere soon, so the photos won't seem completely out of style in the near future. Like, imagine if you did a photoshoot like this at a Blockbuster back in the day instead. They'd still be fun to look at now, but a little sad at the same time, you know?

Anyway, when Amber Cox and her family decided to do their photos at IKEA, they probably thought it would be a cute idea, but didn't know just how awesome the shots would turn out in the end. I mean, take a look for yourself. Can you say "goals"?

The photos feature Amber, her husband Steven, and their 7-month-old, Ezra, hanging out at an IKEA store, and they are absolutely epic. In an email to Romper, Cox says, "Sometimes I go twice in one week just to get new ideas for our home!" That's commitment to interior design right there.

Cox tells Romper that IKEA was a no-brainer for them, simply because she loves the store so much:

I have been an ikea lover for a while now.

I’m always looking for new ways to simplify and organize my home, and now being a mom it’s super important because I don’t ever want my home to be too overwhelming for me to come home to.

And it sounds like her family is eager to spread the IKEA love to others. She says that her family actually went back two days after the shoot to take some friends to visit the store for the first time, and that they loved it as well. (Because how could they not?)

Cox says that IKEA is really a perfect place for their family to shop, because it's "very family friendly." She pointed out that the store is a great option for them as young parents, especially because there's a daycare right in IKEA for when their son gets a little bit older. She says:

But once he’s old enough we can take him to the Daycare they have there for the little ones. A DAYCARE. Guys. For real. Why doesn’t every shopping place have this?!

Some of the shots are closeups of Ezra, too, and they will melt every cold part of your soul.

The photographer on the shoot, Tammi Camp also tells Romper that Cox wanted to do "a more lifestyle approach," which happens to be her specialty. She also loves IKEA, and doing the shoot there made perfect sense to both of them. Camp says, when it comes to IKEA:

I can’t tell you how many times I go… it’s almost embarrassing.

And she says that she tried to make the family's shoot organic, especially since IKEA really is a regular part of their life:

As a photographer I try to capture real, raw, candid moments and Ikea was the perfect place to do it!! Now they have memories of something they do often!

Cox says that she's a photographer herself, and she "wanted something fun, different and just 'real life' for family photos this time around." She says Camp had been "dying" to do a shoot at the store as well, and the rest is history.

And why not IKEA? Another mom did a maternity photoshoot at Target recently, and that was pretty amazing. It seems Cox and her family took a similar approach to their love for IKEA, and they got unique photos that are way better than a bunch of people wearing matching outfits.

Admit it: IKEA is a pretty legendary choice for a family photoshoot. The Coxes have set the bar really high.

More Like This
Paris Hilton Is Officially A First-Time Mom
When Does A Baby Recognize Their Father? A Pediatrician Explains
Does The FDA's Plan To Limit Lead In Baby Food Go Far Enough?
Keke Palmer Casually Drops Her Baby's Sex On Jimmy Fallon
What Parents Are Talking About — Delivered Straight To Your Inbox