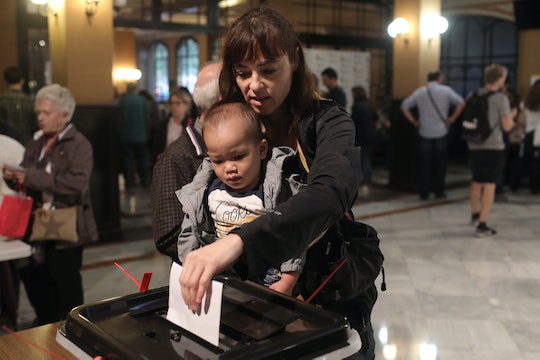 Call The Name Police: This Family Has To Go To Court For Giving Their Daughter A "Boy Name"

For anyone that watches Judge Judy or anything like it, there's really no limit to the ridiculous things that people will go to court for. And whether or not you agree with the judge's decision, it's still usually pretty entertaining. Except when it isn't. Case in point: this family has to go to court for giving their daughter a "boy name", and that isn't an exaggeration.

In France, there's essentially something referred to as the "name police," although that's not their official title. But that's basically what they do, in no uncertain terms. According to Fatherly.com, "In France, courts have the power to 'veto' names they feel might cause a child harm at some point in their life." And so, when a couple welcomed their third child in November and decided to name their daughter "Liam," the French courts stepped in for a somewhat troubling reason.

The state has argued that by naming their daughter Liam, the couple has endangered her. The name "would be likely to create a risk of gender confusion" according to The Local, and "therefore contrary to the interest of the child and could harm her in her social relations." Obviously, in the United States, this ruling seems pretty arbitrary, although France clearly has its own rules.

Of course, parents in the United States have the right to name their kid whatever they so please, and a baby girl named Liam probably wouldn't even register as anything out of the ordinary. But, in France, things are different. As GlobalNews.com reported,

In recent years, courts in France have intervened to prevent children from being named Nutella, Fraise (French for strawberry), Joyeux (French for happy), MJ (after Michael Jackson), Manhattan and Deamon, among others.

So, it somewhat makes sense that courts in France would have an issue with a couple naming their daughter Liam. And as the daughter's mother told The Local, she had also been told that she might want to give her daughter a "more feminine middle name" to avoid going to court. But, she didn't. And with a trial date unknown, it seems as though the parents are prepared to fight back. As The Local reported, they've already hired a lawyer and pushed back the date of their daughter's baptism until all is resolved.

Again, while Liam might not seem like that outlandish of name to many parents in other parts of the world, in France, the rules are different. During the first trial, prosecutors argued that Liam was a male name, and could never be used for a girl. And as The Local reported, they used "examples of the maverick lead singer of Britpop group Oasis, Liam Gallagher as well as American-British actor Liam Neeson who starred in Schindler's List to support their argument."

But there's no official decision yet, it seems, fortunately for the parents. And that's something that parenting coach Julie Romanowski, considers a victory. For her, according to GlobalNews.com, original names are actually good for kids, as she told the website:

It’s promoting individuality and I love that for any kid in any way. The parent who gives their child an unusual name obviously wants that child to be its own person. And it sets the tone for the kind of parents you’re going to be.

So, hopefully, Liam's parents will be able to keep the name they chose. As has been scientifically proven, gender is fluid, and giving a child a so-called "boy name," isn't going to inhibit that child from living their best life. There are plenty of gender-neutral names out there, and Liam might just be the next big one.