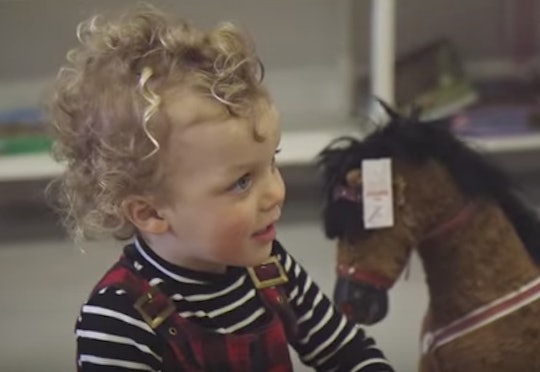 Studies have shown that kids benefit from gender neutrality. Raising children without gender stereotypes allows them to expand their worldview without strict expectations. In fact, this family is raising two kids with no gender whatsoever, and in a really interesting new documentary, they show the world exactly how it works. .

The documentary, released by VICE on Wednesday, explores gender expression in Sweden amidst criticism over the country's stance on gender neutrality. Titled Raised Without Gender, the film follows photographer Del LaGrace Volcano, their two children, 5-year-old Mika and 3-year-old Nico, and their grandmother Margareta as they navigate what it means to live outside of the gender binary.

In the documentary, Del talks about how Mika and Nico do not conform to culturally-enforced gender stereotypes. Instead, the kids get to choose their pronouns, what they want to wear, and what toys they play with. Del also replaces pronouns in books they read to their kids, and refers to themselves as "Mapa" to represent "mama" and "papa." (Del was born intersex.) This allows Mika and Nico to form their own identities without the outside influence of predetermined stereotypes.

Sweden is considered one of the most progressive countries when it comes to gender. Since 1998, the Swedish government has disallows schools from enforcing gender stereotypes. Then in 2011, the first gender-neutral preschool opened. And two years ago, the country's official dictionary added the gender-neutral pronoun "hen," according to the Guardian.

Not everyone agrees with Sweden's approach to gender. One critic, Swedish psychiatrist Dr. David Eberhard, argues that the country's recommendation to not reinforce gender stereotypes is "damaging" because,

It tells us that behaviors that are typical for boys, typical for girls, is problematic. It's a brainwashing strategy that you are eradicating sex differences.

Eberhard goes on to say that he would like "kids to be kids" and that children should decide how to express themselves. In other words, if boys want to "act" like boys, let them. But, as the VICE documentary pointed out, that's the exact goal of Sweden's gender neutral program: To allow children to behave in a way they feel most comfortable. That includes exhibiting characteristics that are traditionally associated with their sex assigned at birth.

Research already shows that raising kids outside of the gender binary is beneficial to their development. According to Quartz, a study published in the Journal of Experimental Child Psychology found that children in one Swedish gender-neutral preschool were less likely to gender-stereotype or gender-segregate. By bucking culturally-enforced norms, those children open themselves up to more opportunities, which would mean more success later in life, the researchers explained in a news release.

And honoring a person's gender identity is not that hard. Take Jennifer Lopez, for example. The Bronx-born entertainer received props recently for using the proper pronoun to refer to her sister's non-binary child, who goes by they, according to NBC News. That respect for her sister's kid's identity made a huge impact on transgender and non-binary people who are often victims of harassment, violence, and homicide.

Raising kids through a gender-neutral lens shouldn't be a controversial practice. Parents give their children agency when we remove gender stereotypes from the table. It allows little ones to develop a broader worldview, and be less bogged down by other people's expectations and true to their own. You may not like your kid's choices, but those choices aren't yours to make.