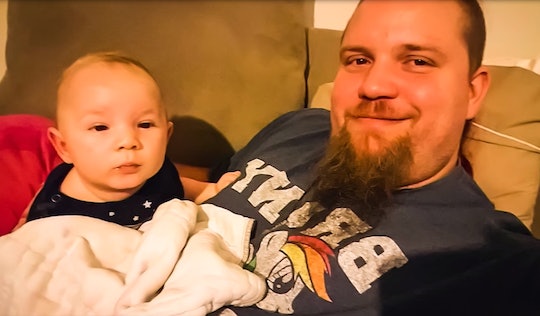 Losing a child is one of the hardest things to cope with and I always marvel at parents who are able find the strength to go on. One family is now trying to turn their heartache into action by urging parents to vaccinate their kids after their 4-month-old son tragically died of meningitis, as local CBS News affiliate WTVR reported.

Little Killy Schultz, from Chesterfield, Virginia, had just come from daycare when a fever began to rise and a rash to form. His mother, Alex Dempsey, told WTVR that it was a warm day, so her concern was simply to get him home so he could cool off. She and Killy’s dad, Gabriel Shultz, gave the infant Tylenol, which failed to combat the symptoms, according to WTVR, so they took him in to the hospital where he was quickly admitted into pediatric intensive care.

Tests eventually revealed the likelihood that Killy was battling meningitis, an inflammation of the membranes that surround the brain and spinal cord, according to the Mayo Clinic, and is preventable by vaccination. Killy died within 24 hours of his first symptoms, according to WTVR.

Killy’s parents told the news outlet, “If anything comes out of this we want people to be aware that vaccinations can prevent things like this. Vaccines aren’t just for kids they’re for adults too.” Killy's mother also added, according to WTVR, that everyone who came in contact with her son, including children at his daycare, were given a preventative dose of the vaccine.

The Department of Health told the couple that Killy likely picked the disease up from a carrier, according to CBS 46. According to the news station, Dempsey said:

Health officials we’ve spoken to who have been trying to track this down that’s just their best guess that an unvaccinated person was carrying it around and my child happened to be the one who came in contact with it. He was just a baby, so he really didn’t have much of a chance.

Symptoms of the disease in newborns are a high fever, irritability, sluggishness, constant crying, stiffness in the neck and back, a bulge in the fontanel on a baby’s head, and poor feeding, according to the Mayo Clinic. Dempsey told WTVR that while Killy was in the hospital his condition deteriorated quickly. “He was still trying to make little sounds, but he had a hard time opening his eyes and his blood pressure was very low," she told the news outlet.

The Virginia Department of Health is investigating where Killy might have picked up the disease, according to WTVR. Meningitis can be caused by a virus, fungus, or bacteria, according to the Mayo Clinic. The bacterial version can be transmitted through saliva by sharing drinking glasses or silverware, for example, as ABC News reported after an outbreak in Ohio killed two high school students. In that case 5,800 students were vaccinated to prevent a widespread outbreak, according to ABC News.

The Centers for Disease Control and Prevention recommend that all preteens (between the ages of 11 and 12) should be vaccinated against meningitis and a booster dose administered between 16 and 23 years of age. For babies, there is a valuable HiB vaccine recommended between 2 and 6 months of age that can protect their fragile immune system against meningitis, according to the CDC.

Despite overwhelming scientific evidence that support the benefits of vaccines, the topic is still highly controversial. According to The Independent, some parents believe that an overall healthy lifestyle is enough to protect against disease by keeping the immune system strong. Parents sometimes fear the possibility of side effects from vaccinations causing conditions like autism, but studies have proven no link. The nonprofit vaccine research institute Sabin cites two studies, one performed in Japan and one conducted in the United States., which prove no causation of autism spectrum disorders by vaccines or their preservative agents. And, as many people point out, including Dr. Sanjay Gupta, writing for CNN, the benefits of vaccinating far outweigh any risk.

Sabin also noted that many people are beginning to understand the importance of a “herd immunization” approach, in which an entire at-risk population — like infants — are protected because everyone around them has received the vaccine. Unvaccinated people in the “herd” create potential holes for infection to enter, which seems to be the potential culprit in Killy’s case. The American Academy of Pediatrics has even taken a stand on the issue, recently changing its rules to allow pediatricians to refuse to treat patients whose parents will not vaccinate, according to Forbes.

This family will never fully get over the loss of their child but, by spreading their message they hope to prevent other families from experiencing the same pain.