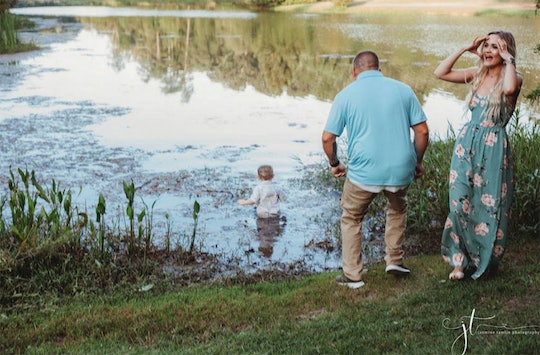 She might not know it yet, but Haleigh Mizzles just landed on the best family moment ever. It all went down when the Texas mom-of-three organized a photoshoot for her family, thinking she'd walk away with perfect and glossy photos as keepsakes. Spoiler alert: Haleigh's fantasy went absolutely haywire. And although her experience might seem like a fail to some, this family photoshoot gone hilariously wrong is what memories are made of.

When this Tyler, Texas family commissioned pro photographer Jasmine Tamlin, the idea was to take some late-summer pics to preserve the current clan, which includes Haleigh, dad Matthew, and their kids, Ella, 6, Lincoln, 2, and Beckham, 11-months, as ABC affiliate KTRE Channel 9 reported.

Although the photoshoot started off OK, it took a turn left thanks to little Lincoln, who had been placed on a blanket near a picturesque pond so Tamlin could get some moments just between mom and dad. While his parents were preoccupied, Lincoln started hurtling himself toward the water, because toddlers. "He said he wanted a ‘drink-y’ and then he said he was hot," Matthew told KTRE. Ha! Honestly, I can't blame the kid... the summer heat can be brutal.

Of course, a toddler speeding toward a body of water meant Haleigh and photographer Tamlin were shouting on the sidelines as Matthew fished his son safely out of the water. Meanwhile, Haleigh looked to be veering between laughter, surprise, and concern.

The best part? Tamlin, trusty camera in hand, just kept on shooting. The result was a hilarious series showing everyone muddy after the incident.

"Sometimes you photograph toddlers, and sometimes they jump into ponds," Tamlin wrote in a Facebook post that was quickly picked up by numerous outlets. "I had a blast photographing this family, even though 2 out of the 5 members got drenched in nasty pond water."

The photographer, who specializes in working with natural light, told KTRE News had high praise for the Mizzles. "The fact that they were able to just laugh about it says a lot about their family."

Tamlin went on to tell Romper over Facebook that moments like these are what truly defines family life for what it is, vs. a picture perfect idea people sometimes have in their heads.

"This session was definitely my funniest and realest session ever," Tamlin says. "I keep getting asked the question. 'Why did you keep photographing?' And to answer that briefly, I try and capture the pictures of my families that I would want taken of myself. I call them 'Lifestyle sessions,' because I want to capture the real and raw nature of parenthood."

I just love this story, and now that my kids aren't quite as little anymore, I can say for sure that our favorite family memories always involved some mix-up or incident, like the time we finally got to take our kids on a cruise, only to have the entire clan quarantined in our cabin on the international high seas thanks to Strep. We can't retell this story without cracking up. Family life is chaotic, but you've got to just roll with it.

This was the Mizzles family's first attempt at an orchestrated photo session, but I sure hope it won't be their last because these kinds of moments are pure gold. And I have a feeling the couple's kids will have fun revisiting these memories when they're older.