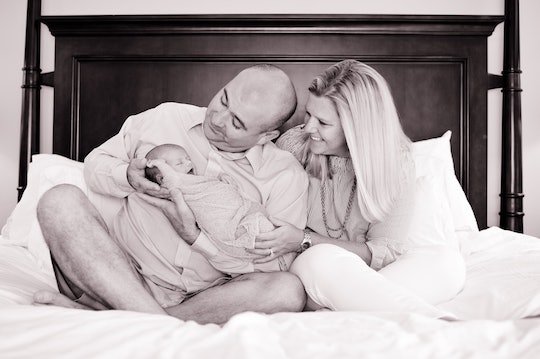 Family Welcomes A Girl After More Than 100 Years Of Boys

There's something to be said for family traditions passed down from generation to generation, as well as family traits. But for one South Carolina couple, their growing family broke over a century of tradition and traits within the Settle family. After more than 100 years of only boys, their family welcomed a girl. Their daughter, Carter Louise, was born on June 25 to proud parents Kelen and Will Settle.

The family first learned of the incredible news back in December at a gender reveal party in Atlanta, Georgia. "We really thought it would be a boy," Kelen told People. "But when the pink and purple balloons came floating out of the box announcing that yes, a baby girl was on the way, everyone at the gender reveal party couldn't believe the surprise. "Everybody started freaking out, especially Will’s parents."

It wasn't until Will's father did some extensive research into their family's history before they discovered just how long it had been since a girl was born into the Settle family — an astonishing 137 years. Will told his local NBC affiliate his father went digging into the family history after he realized he didn't have any sisters or aunts. "It was an absolute wow moment. I think it’s going to be cool for her. It’s a little fun fact," Kelen said.

That the Settles were finally welcoming a girl was such big news, Will's coworkers had quite the surprise for them after Carter was born. Will works in the billboard business, and a coworker surprised him with a giant hot pink billboard in Savannah, Georgia, that read "Welcome to the world Carter Louise Settle," complete with a mega-sized adorable picture of his newborn daughter. Will told WSAV TV, "I thought that it was it could’ve been a little bit toned down. But that’s what billboards are supposed to be. They’re supposed to stand out, they’re supposed to grab your attention and that billboard certainly does that."

With so many men in the Settle family, Kelen said that their daughter is already getting "spoiled rotten" — after nearly a century and a half of boys, I don't blame them. I'm a mom to a boy, and as much as I love dapper little boys' clothes, sometimes I look longingly at the girls' stuff at Target... But I digress.

Where did the Settles get inspiration for their daughter's name, Carter? "We didn't have many girl names to go on from his family, obviously," Kelen told People. In the end, the pair "settled" on a name that they both liked. That it's a gender neutral name makes it all the more awesome about her being the first girl in their family in 137 years. Besides picking a name they really liked, they were also thinking to Carter's future: "We wanted something strong that would be cute when she was 2 but would also work when she’s in the job force."

Even though Carter's big brother Rowland, who is 6 years old, was hoping for a little brother, according to his mom, her son is "smitten" with his baby sister. "He was very adamant that he wanted a brother and thought that a 6-year-old would pop out and he’d have an instant playmate," Kelen told People. "But the first time he met her he kept saying, ‘Aw, she’s so cute.’"

Cheers to a new legacy of women in the Settle family.